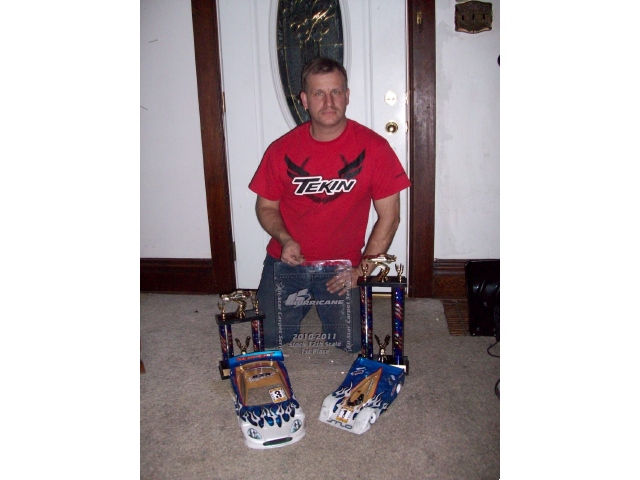 The Hurricane All Star Seires and The Midwest Grandslam Series are each carpet on-road, multi leg, traveling series allowing 1 drop each. Together they cover the majority of the Midwest and some of the best talent in Carpet On-Road racing.

The Hurricane Series is best 4 out of 5 covering some favorite local tracks in Wisconsin, Illinois, and Indiana. I contested the season in 1/12th Stock, the season started slow as I was devloping a stock set-up for the relatively new Serpent S-120 link. The season picked up from there with a near TQ and 2nd place at the 2nd stop, then TQ and win at the 3rd and 5th stops. Ended the season winning the 1/12 Stock class. I also dabbled a little in Mini Cooper and Rubber Touring in a couple of the races. Through it all, from the Tekin FX in the Cooper, to the RS in the 1/12 and RS-Pro in the touring, I never suffered from a lack of Power.

The Midwest Grandslam series is a best 3 out of 4 series, covering Indiana, Michigan, and Ohio. This series tries to provide the average racer with the Big Race experience with a low key atmosphere. From the Halloween Classic which is a warm up for the US Champs to the late Feburary race which is a great warm up for Carpet Nats, this series sees some of the Country’s and even the World’s best racers with entries from at least half a dozen National Champs and World Class drivers. I competed in both 1/12th Stock and World GT, while also coordianting the series. It was a tough field of top level stock drivers in 1/12th with Associated’s Joe Trandell piloting his Tekin RS equip’d ride to a commanding Win and myself knocking on his back bumper at each turn for a 2nd place for the season, in all at least the top 8 were all running Tekin RS. In World GT, again it was Joe with nearly a perfect season and the 2nd place came down to the last, tied for second I got the better qualifing spot but Rich Martsolf drove a better main and bested me for 2nd and I settled for 3rd. Again nearly the entire field was Tekin equip’d.