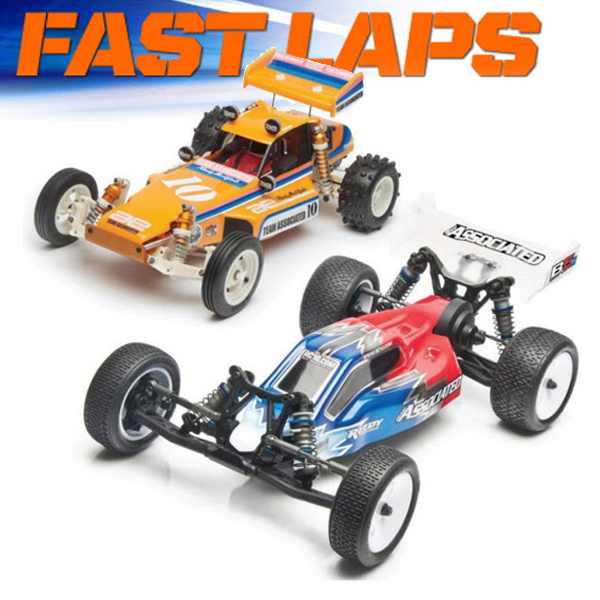 Now that Pro-Line has unveiled the awesome Performance Buggy conversion for their PRO-2 truck (as well as the Traxxas Slash if outfitted with various Pro-Line components), there’s no better time to talk about the widening gap between a large portion of RC racing enthusiasts and their non-competitive hobby brethren. The closed-cockpit transformation that requires little more than a roll cage, body set, and a new front shock tower, but radically changes the appearance of the full-fendered short course truck. It’s a shame that it probably won’t ever catch on with racers.

All three of these buggies look amazing and will no doubt be popular with enthusiast drivers, but it’s too bad the style won’t catch on among the dedicated and hardcore RC racing community.

Why do I think that? Well, it’s pretty simple: the Kyosho Ultima DB, Losi XXX-SCB, and Team Associated SC10B all struggled to find significant traction at the racetrack. Short course truck racers didn’t want to compete with buggies that were immune to the perils of jumping with a parachute for a body, the short course buggies weren’t competitive with standard 2WD buggies, and without a strong standalone class in which to race the cars there was little reason for existing racers to get one, or for newer racers not to move on to something else. 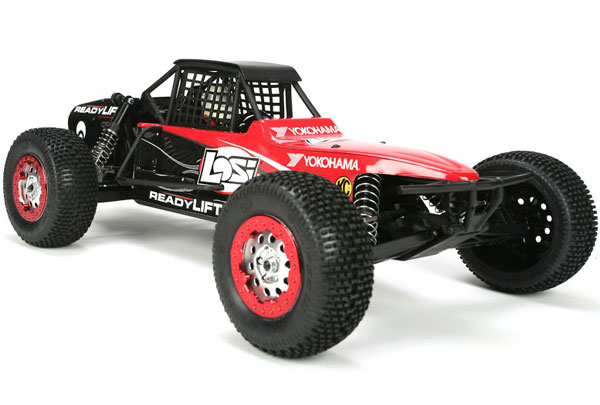 The XXX-SCB was a narrowed version of Losi’s short course truck at the time, and wore a slender body with beadlock-style wheels.

The Team Associated SC10B wasn’t nearly as narrow as Losi’s buggy, and the body conveniently clipped to the chassis. The front shock tower and gullwing arms for the T4.2 and SC10.2 came from this chassis! 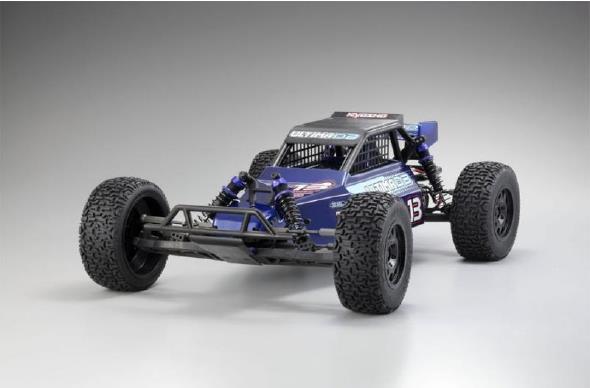 This little-known variant of Kyosho’s awesome Ultima SC was actually the first of its kind to hit the market (DB stands for “Desert Buggy,” by the way).

If you rewind back to the early 80s when Team Associated’s first RC10 chassis turned the off-road world upside down, you’d find a racing scene that was radically different than what we have today. The designers of that original RC10 looked to full-size buggies not only for inspiration on how the car should look, but for clues on how to best create a suspension system that would handle the rigors of off-road racing. The oil-filled coilover shocks stood up by tall front and rear towers, wide track suspension arms, and aluminum tub chassis supported by nose tubes were all derived from the very buggies that tackled the desert of Baja and the closed courses of the Mickey Thompson Off-Road Stadium Series, as did the slender single seat-style body and knobbed tires. Team Losi followed suit when they released the JRX-2 a few years later, though the devolution of the scale accuracy of the class had already begun. 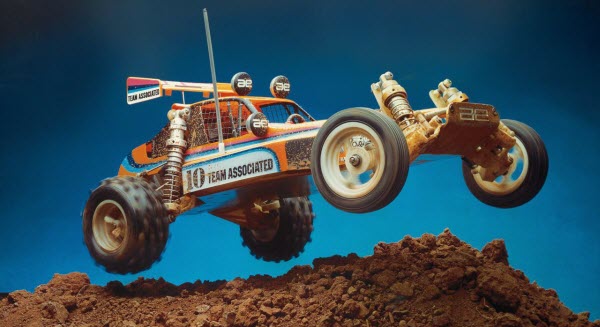 Team Associated’s new B5M comes with a body that fits in perfectly with today’s current crop of 2WD buggies. 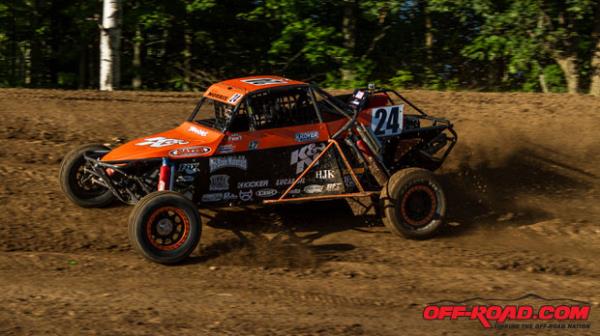 Thirty years later, today’s 2WD buggies are barely recognizable when compared to where it all started. In a world where tenths and even hundredths of a second matter, body designs have warped from realistic buggies to wedge-shaped Lexan arrows with downforce-generating wings nearly as wide as the car! If you look up the recent body releases of today’s racing-inspired designs on the Radio Control Zone, you’ll find plenty of comments from non-hardcore racers lamenting the loss of realistic looks (along with sometimes colorful language describing the product), yet weekend warriors continue to snatch up these new designs looking for every advantage they can get.

I understand both sides of the story. I’m an ultra-competitive racer at heart and the thought of stubbornly choosing not to use a particular product that may provide an advantage (or at least put me on an even playing field) just for the sake of rebellion is absurd, but I worry for what the movement may do to the future of RC racing for some of today’s biggest classes – and for what it’s worth, I’ve yet to fit an optional body shell to any 2WD buggy I’ve run just to see if worked better, even if it’s all just placebo effect. After all, I don’t find it a coincidence that the world of Touring Car started to decline after such rapid growth when the bodies transitioned from the Honda Accord, Alfa Romeo 156, and Dodge Stratus to “LTC-R,” “P37,” and “MC10.” 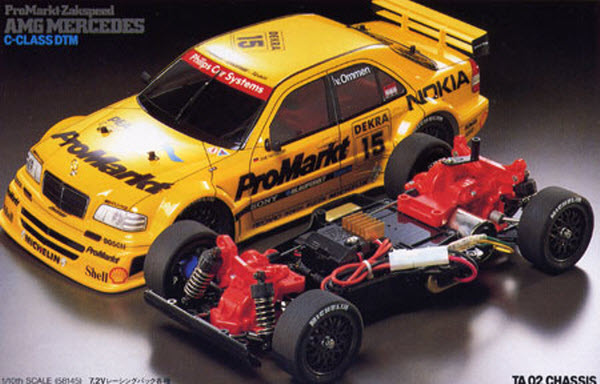 There’s no doubting this PROTOform P37 body’s track prowess, but it looks nothing like any current road-going vehicle.

The same thing has happened with the short course truck class in several areas across the country, but in a different way. Many hobbyists that were introduced into the scene by short course trucks have moved on to other classes – some toward 2WD buggy, but enough to cause a resurgence of the “stadium truck” class that, like the buggy division, started with the realistic roots of the RC10T and JRX-T and has since spiraled out of control. Racers have been returning to the stadium truck scene for a number of reasons: they’re easier to drive, they jump better, they turn faster lap times, and the open-wheeled design makes it more difficult to give someone the “bump-and-run” but instead places importance on making clean passes. That’s all well and good, but how some of today’s designs can be even remotely misconstrued as anything that resembles a “truck” is beyond me. 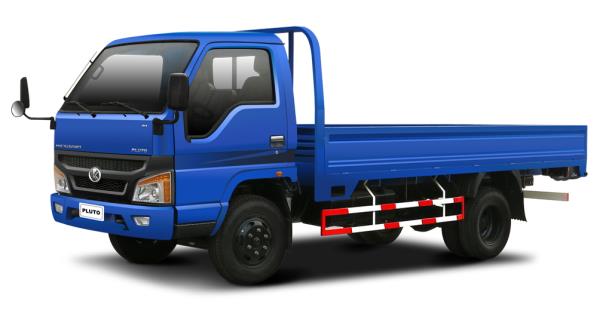 …looks way more similar to this…

…than it does one of these.

Racing class attrition due to the escalating speeds of competition (and the associated costs) are one thing, but scale accuracy is continually demonstrated as one of the most effective ways to capture a new audience – which is absolutely necessary for the survival of any industry, let alone a small sector of the hobby RC world in which enthusiasts line up to race against one other at the local track. It’s one thing if RC racers argue whether or not they find a particular body attractive, but if the uninformed can’t determine what makes a “truck” a truck, and a “buggy” into a buggy, well…we’ve got a problem.

Sound off! Talk about Fast Laps in the comments, joins us on Facebook, Tweet @rccaraction, or email FastLaps@AirAge.com