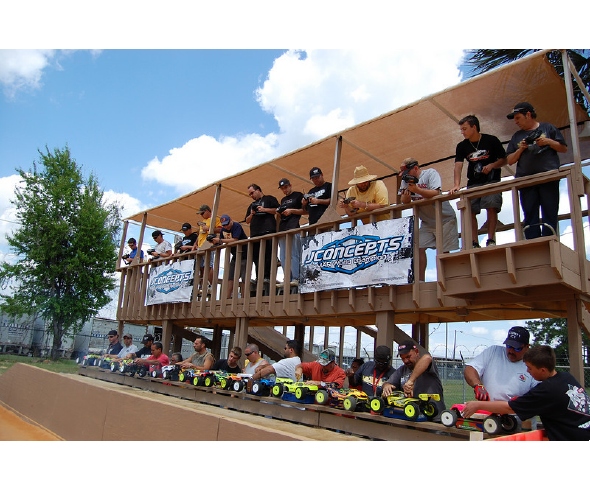 JR Mitch and the JConcepts Team continue their success at the FSORS race # 6 hosted by Outtacontrol Raceway.

A fantastic turnout came out for round 6 of the FSORS series hosted by Outtacontrol Raceway in Ocoee, FL. With one of the best weekends so far of the year, the Outtacontrol team did not disappoint with a great layout and surface which provided the ultimate test for some of the best drivers in the South East. The JConcepts Team was on full alert all weekend with the best competition attending; it was all-out at Outtacontrol.

JR Mitch showed his dominance by TQ’ing the expert 1/8th buggy class with Teammate Jason Ruona in 3rd position. Also getting in on the action for JConcepts were drivers Brett Kingsbury, Nick Angelides, JP Tirronen and Robbie Saxton. Double Dees V2 and Subcultures was the popular tire of choice by the 1st and 3rd position drivers. Crossbows were also a popular tire in the 30 minute A-main.

The main featured a great start by JR and Jason but an unfortunate failure sidelined JR on lap 3 forcing him out of contention. Jason held a comfortable lead but soon gave way to Easton who was recovering from a poor start. Finishing order was Billy Easton, Jason Ruona and Leon McIntosh.

In the Truggy class JR Mitch again rose to the top of the field utilizing the Punisher body, Sevens and Cross Hairs accessory combination. Blitzing the track in truggy has become routine for JR, but the competition was felt from Teammate Brett Kingsbury who qualified in the 2nd position. Luis Perez and Tony Pattishall also joined in the A-main with their JConcepts outfitted Mugen MBX6-T truggies.

In the A-main the battle was on in the front of the field as JR maintained a comfortable lead over Ryan Johnson and Sean Kersten. JR suffered a problem with 10 minutes to go which put him almost a lap down which he was unable to recover from. Ryan Johnson took over the lead and held on for a well deserved win.

Congratulations to all the winners and special thanks to the FSORS series and Outtacontrol Raceway on a fantastic event.