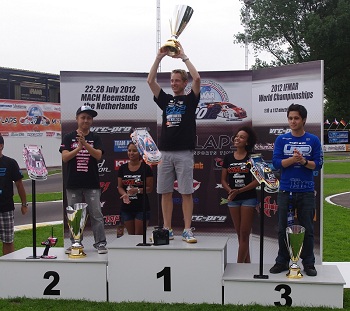 The 2012 IFMAR Touring Car World Championships were held in Heemstede, The Netherlands July 25-28. Team Orion’s Ace Jilles Groskamp started his racing career some 20 years ago at this very track. Jilles who has lived in Thailand for the past couple years working very closely with the development of Team Orion Products, was very excited to get back to where it all began.

In qualifying Jilles Groskamp was very quick. Jilles put in many fast runs including a TQ in Round #4 of Qualifying. Jilles would just miss the overall TQ for the event by only 2 points. This would be good enough for Jilles to start 3rd on the grid for the Triple A-Main Event format giving him a great shot at the win.

In A-Main #1 Jilles got a good start from the 3rd position. After lap #1 it was Hara leading with Volker in 2nd and Jilles close by in 3rd. Now 1-minute into the race Volker tries to go inside on Hara for the lead and they touch. Volker goes flying off the track and Hara remains in the lead. Jilles did a great job avoiding the crash and checks up for Hara and Wilck gets by for 2nd. Jilles showed great patience running 3rd with allot of time left on the clock. Almost at the halfway point of the race its Hara still leading, Wilck in 2nd, and Jilles in 3rd. 1 lap later Wilck looses traction in the hairpin and spins out into the grass, Jilles now into 2nd! With 2-minutes remaining Jilles put his head down and started to lay down fast lap after lap to reel in Hara.

With 1-minute left to go in the race Hara goes a little wide and Jilles gets by to take the lead! Hara then gets by Jilles a few corners later. What an awesome race! With 1 lap to go, Jilles was now right behind Hara…it was going to come down to this. With only a few corners left, Jilles knew he had to make a pass and make it fast. Coming around the hairpin rocketed by Hara through the last chicane right before the finish line as time runs out. Jilles would take A-Main #1 by .1s over Hara!

In A-Main #2 things didnt go Jilles way and he was forced to retire early finishing with a 10th overall. His quest for his 1st World Championship would come down to the 3rd and Final A-Main.

A-Main #3 would decide the New Touring Car World Champion. A quick recap: Jilles had a 1st and Hara had a 2nd from A-Main #1, Volker had a 1st and Naoto had a 2nd from A-Main #2. Wilck finished 3rd in both A-Main #1 & A-Main #2. At the start of the tone it was Hara leading over Volker with Jilles in 3rd. Jilles gets by Volker and now its Hara leading over Jilles only 2-minutes into the race. Hara and Jilles stretch out their lead over 3rd and now its a 2 horse race for the World Championship. Jilles would pace Hara for the next 2-minutes taking the World Championship down to the last minute.

With 1 lap to go, Jilles remained the same as his first lap letting off many times not to come together with Hara. Jilles could hear the pace throughout the Main Event and knew he didn’t have to pass Hara to Win the overall. As time ran out, Hara would take the win for A-Main #3 with Jilles finishing only .3 behind for 2nd. Now with Jilles and Hara both finshing with a 1st and 2nd for points, the IFMAR tie-breaker is the single fastest A-Main Winning Time. Jilles A-Main #1 time was just over 2 seconds faster than Hara’s A-Main #3 time…this making Jilles Groskamp the 2012 IFMAR Touring Car World Champion!

2012 is also Team Orion’s 25th Anniversary and they celebrated it with their 13th World Championship title.

If you like this article, check out this additional article on Orion.