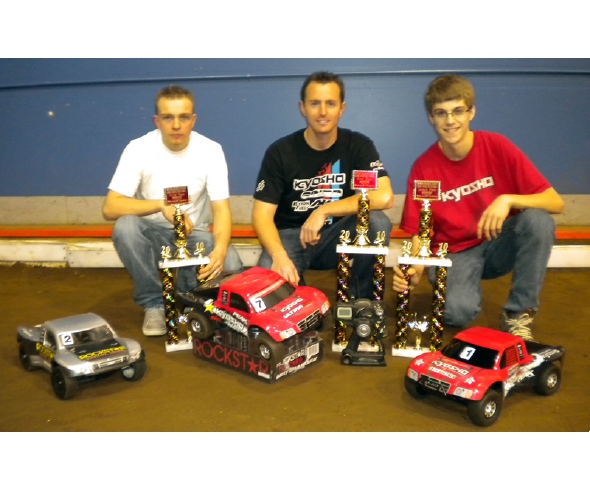 Portland R/C Raceway and Rockstar Energy Drink put on a Short Course Series starting in December and ending in February. The series averaged nearly 50 entries of only short course trucks per race. The 3 month race series would consist of 6 races with each drivers 4 best points counting for the overall Championship in each class. There were 5 total classes for the series: Novice, Stock Spec, Expert Stock, Modified, and 4×4 Modified.

Kyosho Team Manager Joe Pillars competed in the Modified SC Class. He started racing the series with a different manufacturers short course truck to do some testing since the Kyosho Ultima SC was not yet available. Pillars went on to win the first 3 races of the series. He then was forced to miss the next 2 rounds because he attended the CRCRC Winter Mid-West Champs in Columbus, OH and The Dirt Nitro Challenge in Phoenix, AZ. With both of his throwouts already used, the Rockstar Modified Short Course Championship would come down to the final race.

Pillars went on to TQ the first round of qualifying with his brand new Kyosho Ultima SC. Newly discovered young talent and Kyosho’s newest Team Driver Andy DiBrino went on to TQ the second round of qualifying over Pillars by less than 1 second to take the overall TQ with his Kyosho Ultima SC. Pillars and DiBrino battled back and forth for the first 3 minutes of the 6 minute A-Main. When the checkered flag waved, it was Joe Pillars crossing the finish line first and taking home the Championship. DiBrino finished a very impressive 2nd and finished 2nd overall for the series. Ike Reed finished in the 3rd spot.

Both Pillars and Dibrino raced the entire series using JConcepts Goosebumps in the Green Compound.