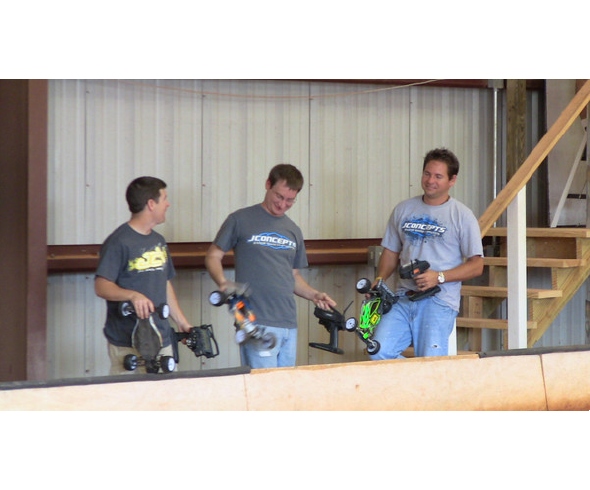 With a reported weather storm on the radar, a quick change of itinerary from Coral Springs to Treasure Coast Raceway made round 5 of the Super Cup even more exciting. With this being a make-up and additional race to the 2010 series, drivers were hyped and ready for action on the technical Treasure Coast track. Huge thanks to both the Coral Springs club and Treasure Coast Speedway for their constant effort and support of the racers in Florida.

Setup and practice was a snap and racers piled in and got ready for qualifying. The track started a little on the wet side but it quickly became grooved and wheelies became normality. Can everyone say Bar Codes?

JR Mitch got us started off in the A-main in the electric 1/8th E-buggy class. JR outdistanced the field with a heavy dose of trigger and traction courtesy of the Blue compound Bar Codes his RC8b-E was on rails setting fast lap for the entire event on numerous occasions. Finishing in the 2nd position was Dan Borkowicz, with Eric Varney in 3rd.

The vintage vehicles hit the track once again on the Super Cup and Jeremy Harris meant business in the 2wd stock class. With a slow start Jeremy had a close battle early on but the strength of the tried and true RC10 never relented. Choosing the brand new Flip Outs tire in Green compound Jeremy’s RC10 was stuck to the track taking the win. Consistency and speed was the name of the game for Jader Lopez who finished in the 2nd position, while Dan Borkowicz rounded out the top 3.

With the track packed with spectators and racers everyone wanted to watch the 2wd modified A-main. TQ Jason Ruona rocking the Bar Codes in blue compound got the quick start but got into trouble just before the step-off and got sideways, and Paul Wynn joined the tangle. A monster pile-up ensued and Paul Wynn lost valuable positioning while Zack Genova, Jason Ruona, Toby Walker and others got a relatively clean start. Zack maintained a slim lead over Ruona but soon made a mistake placing Jason back into the lead. Dropping it down into consistent mode, Ruona drove out to a 7 second lead. Jeremy Harris put on a late race charge but it was not enough and had to settle for 2nd with Brett Kingsbury finishing in 3rd.

The stock truck A-main was easily the race of the day. TQ Mike Applegate driving his Losi XXX-T encountered some early race trouble while Kory Ferguson led out by a few seconds. A late charge and hot lap-time by Mike placed him back into the lead and he pulled out to a 5 second lead crossing the finish line in 1st place. Early leader Kory Ferguson settled for 2nd place and Double Dee himself, Dave Duncan, finished in 3rd.

Modified truck has been the JR Mitch show all year. Again pulling out to a TQ position and the lead in the A-main it looked to be JR’s race to win or lose once again. However a small mistake and tangle with Paul Wynn allowed Zack Genova to move out front. JR and Paul maintained 2nd and 3rd but traffic became an issue for both drivers allowing Paul to move into 2nd place. Paul ran one of the quickest laps of the event but in the end it wasn’t enough as Zack Genova earned his first modified truck Super Cup win. Paul Wynn took 2nd with JR Mitch in 3rd.

Pro 2 stock SCT was a battle between the points leader Jimmie Cooper and Craig Lowe. Cheston VanAlstyne put his Kyosho truck in the TQ position but a problem forced him out of contention early leaving Jimmie and Craig to battle things out. Craig reigned supreme and earned his 1st win on the 2010 Super Cup series. Jimmie Cooper finished in 2nd with Aaron Wood rounding out the top 3.

Pro 4 SCT was the Scott Delfino show taking TQ in qualifying and 1st place in the A-main. Taking the lead early Scott looked to take the competition out with a stellar opening few minutes. Walter LaFleur and Randy Deppen applied some pressure early but Scott was on rails and powered his way across the line to a well deserved win. Finishing in 2nd was Walter LaFleur with Randy Deppen taking 3rd. Scott Delfino’s stock Slash 4×4 was running on the newly released JConcepts Subcultures in Green compound.

Once again everyone lined the track for the 4wd modified A-main. TQ Jason Ruona pulled out a clean start with super fast JR Mitch getting bumped around and down into the 5th position. JR quickly caught up and made his way into second as Ruona was cruising and protecting the lead on the fast paced track. Around the 4 minute mark Ruona and Mitch were on full pursuit mode turning lap-times down into the 17 second range. Mitch started having drive-line issues with about a minute to go leaving Ruona in the lead for good. Jason Ruona took 1st with Gary Fulp in 2nd and JR Mitch in 3rd. Jason’s B44 was decked out with Double Dees in Green compound all the way around.

Finishing up the day was the popular Pro 2 Modified SCT class. TQ Scott Delfino took the lead quickly but Mike Applegate was hot on his heels and overtook Scott. Running a clean and consistent race Mike pulled just a large enough lead to relieve some of the pressure. Mike crossed the finish line taking 1st with Scott Delfino closely behind in 2nd and Cheston VanAlstyne in 3rd.

This event finished up the Spring Session for 2010 and the Fall Session will start in August. Please visit www.supercupevents.com for details on the Fall session.