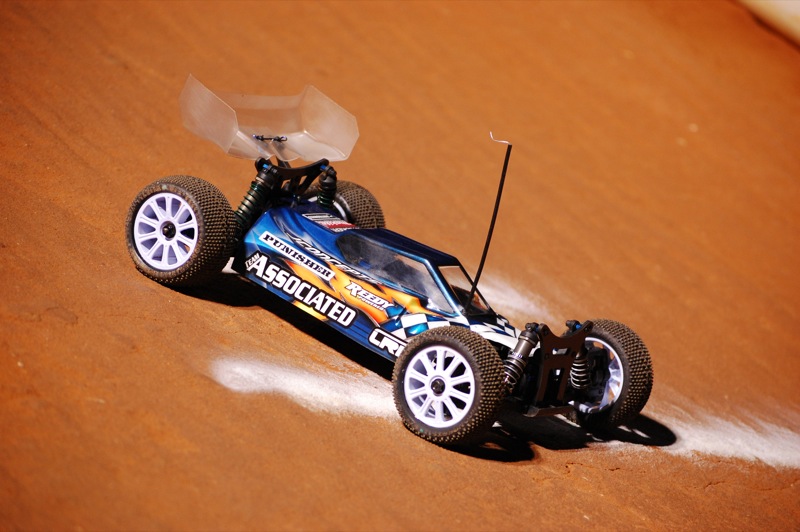 The Super Cup Championship off-road series has turned the corner on the Spring Session and for round 3 made a visit to the popular Coral Springs Radio Control club. The beautiful track with one of the best race surfaces in the state of Florida always plays host to one of the most popular rounds on each Super Cup series. For round 3 the club did not disappoint, with a completely redesigned track layout and manicured surface, the track was race prepped and ready for a record turnout of 204 entries Saturday morning.

The stock classes are as competitive as you can get on the 2011 Super Cup series. A large turnout of drivers in the stock classes made for an exciting day of racing in stock buggy, truck and SCT. Cory Parsons TQed the popular 2wd stock class with Dave Bowser in 2nd and Glenn Worthington in 3rd. At the tone, in the main it was a massive pile-up Cory ended up with the worst of things and Bowser took a large lead. Parsons recovered and moved into the top 3 but it was Roly Cusine who was able to make up the most ground in 2nd as Bowser cruised in the lead. The lead exchanged several times but Bowser remained out of trouble and drove the last few laps error free which opened a slight gap on 2nd. Finishing order was Dave Bowser 1st, Roly Cusine 2nd and Cory Parsons 3rd.

Mike Dobbs owned stock truck all-day. Running a stock RTR T4 body, Dobbs checked out on the competition leaving little doubt who was the quickest driver of the day. Young Daimon Borkowicz (round 2 winner) got a rough start and struggled slightly at the beginning but eventually made up valuable time and finished in the 2nd position. The consistent force behind the Coral Springs club, Tim Moon finished in 3rd.

Stock SCT was the Daimon Borkowicz show all-day long. Starting on the pole position, Daimon wasted no time getting out into the lead and was checked out against stocks finest in SCT. 2wd stock winner Dave Bowser had a small battle with Chris Cortez for 2nd place but ultimately Chris had to settle for 3rd. Daimon crossed the line taking 1st place with Dave Bowser in 2nd and Chris Cortez in 3rd.

The modified trucks took to the track where TQ JP Tirronen went slightly wide off the start and Mike Applegate made a great pass in the first corner to hold a slight lead.   A small mistake by Applegate allowed JP to take the lead.    JP made a mistake on the triple jump allowing Jader Lopez to come storming through to take a large lead.    A few mistakes by Jader tightened the race significantly and a 3 truck race was on.   Jader made another mistake while leading which allowed Applegate and JP to pass.   Applegate cased the small double in the back of the track and JP short jumped the same jump which sent the turn marshals scrambling.   Jader made up valuable ground during the exchange and moved back into second.    Applegate’s double attempt came up short and Jader was back into the lead.  Pressure came from Tirronen and Applegate but Jader remained smooth and consistent.   Jader Lopez crossed the finish line winning his first modified race of the season. Mike Applegate finished 2nd and JP was forced to settle for 3rd.  Jader, JP and Mike Applegate all chose an assortment of JConcepts tires all weekend long. Bar Codes were a popular tire in the afternoon and Double Dees were the best choice at night during the A-mains.

The Short Course 4×4 class saw a large increase in turnout with the release of several new trucks to the market. Felix Law with a brand new Losi SCT-E took TQ honors with some of the fastest runs of the event. The A-main was all Felix, he made an incredible run to 14 laps distancing himself from the rest of the field. Pulling across the finish line it was Felix Law 1st, Chris Meloche 2nd and Augie Lieber in 3rd. Felix was on JConcepts tires all-day long, running Bar Codes in the afternoon and Double Dees during the morning and evening runs; Felix was tough to beat all-day long.

1/8th E-buggy was a popular class once again in Coral Springs. TQ JR Mitch put on a small show in qualifying running the fastest laps and times on the grippy surface. JR’s RC8B-e with Punisher body sat on the pole position for the A-final and once the tone sounded JR was gone. Checking out early JR performed some tricks over the triple jump and difficult downside sections to the delight of the race announcer and crowd. JR finished with the win, Mike Barone 2nd and Eric Varney in 3rd. JR chose the highly versatile Hybrid tire during the main to provide the consistency and speed.

Modified Short Course was once again led by JR Mitch. The speedy driver put on a qualifying clinic placing his SC10 Factory Team on the #1 starting position. The main proved to be more difficult; Ryan Eckert and Mike Applegate got an amazing start and with additional natural wind that had kicked up during this main, the SCT trucks became a little more “floaty” over the jump sections. JR maintained a small advantage over Eckert as the 2 jockeyed for position throughout. JR opened the gap when Eckert had a crash lap which gave some valuable breathing room for Mitch. Finishing the last several laps, JR crossed first with the 4 second advantage over Eckert in 2nd who had 10 seconds over Applegate in 3rd. Double Dees and Bar Codes in green compound proved to be the best match for high traction runs during the day for JR and his SC10 Factory Team.

Jason Ruona TQed the 4wd modified class, narrowly missing the first 15 lapper of the day. Ruona started on pole position and entertained a tight battle with Felix Law on the first several laps of the A-main. Felix looked to the inside on several occasions but could never find a clear opening to make a move. Ruona’s steady driving paid off when Felix made a mistake which created the extra gap. Ryan Eckert recovered from a poor start to pull into 3rd and challenge Felix. The 2 drivers battled slightly while Ruona opened a larger gap. Jason Ruona took the win followed by a hard charging Ryan Eckert in 2nd and Felix Law in 3rd. Ruona’s B44.1 was fitted with Double Dees in green compound all weekend long. Rulux wheels, 6.5” HD wing and Punisher body topped off the winning ride.

2wd modified was one of the most entertaining races of the weekend. TQ JR Mitch made an uncharacteristic mistake on the small double jump on the opening lap giving Ruona a 5-6 second lead very early-on. As the temperatures cooled and the track became more dusty, each lap was a little more difficult as Ruona looked to stay clean and JR and the rest of the pack was charging hard. A few small bobbles from Ruona allowed JR to close in ever so slightly and it was clear this race was going to the wire. JR Mitch put down some of the fastest laps of the main during the last several laps as he pulled up on Ruona. As the 2 crossed the line for the last lap, Ruona cased the back-side double allowing JR to pull up even closer but with only a half-lap to go Ruona remained composed and crossed for the well deserved win. The hard charging JR Mitch finished in 2nd and Ryan Eckert finished in 3rd. Both JR and Jason chose JConcepts Bar Codes in qualifying and Double Dees and Rips for the main. Ruona’s winning ride was also fitted with a Punisher B4.1 body and 6.5” rear wing.

The Super Cup series is growing and with each race you can see the camaraderie picking up between racers which is a welcomed sight. Mike Applegate, the series director, has to be given proper credit for putting on an outstanding show. Mike’s show would not be complete without also including Michelle, Jeremy Harris, Dave Dominguez and Ryan Eckert who each provided relief to Mike all-day long. Coral Springs remains one of the best clubs in Florida and to their credit have created the ultimate track and stop for the Super Cup series. 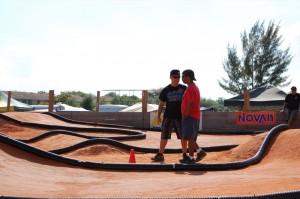 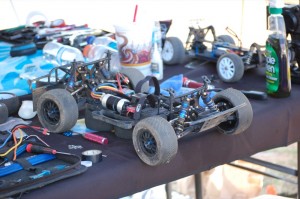 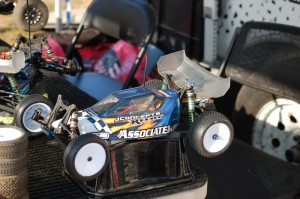 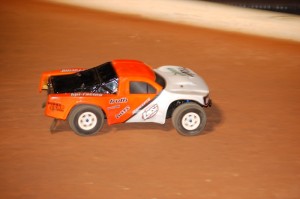