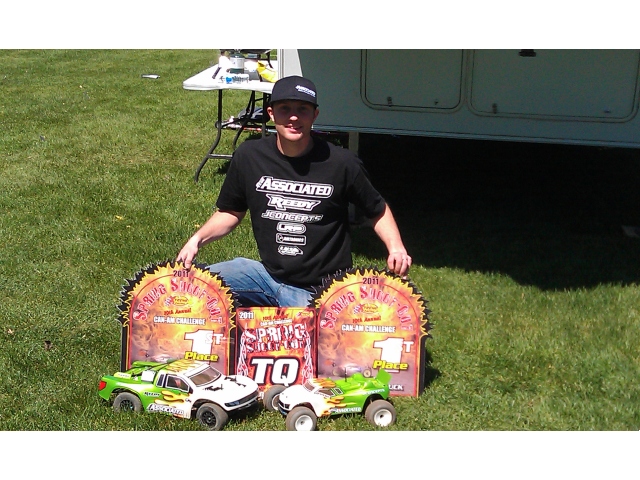 Round 1 of the Northwest Championship Tour kicked off the outdoor race season with the Spring Shootout in Wenatchee, WA. The Spring Shootout starts the season off with some of the best racers around the Northwest and 2011 was no different. The surface became rough and added to the challenge as the weekend progressed with both 1/10 and 1/8 racing ongoing on the track. JConcepts was represented in both 1/8 and 1/10 throughout the weekend.

JConcepts team driver Justin Wilde took to the track running the 4 modified 1/10 classes offered at the Spring Shootout. Despite the rough track qualifying was very tight all day Saturday using the qual points system. Justin was able to drive all 4 vehicles to qualifying positions poised to strike in the mains, including securing the Modified SC class TQ after the first 2 rounds. On Sunday the track continued to get rougher as the mains were run. The one answer to know for tires in 1/10 for the weekend was green compound Goose Bumps. During the A1’s Justin was able to battle his JConcepts Goose Bumps and Punisher body equipped T4.1, B4.1 to victories. As the A2 round got under way this time it was the SC10 and T4.1 to wins in the round, locking up the Modified Truck class. The final round of the AAA’s wowed with some of the closest racing of entire weekend. In the largest 1/10 class of the weekend, Modified SC, it was a battle of Associated, Kyosho and Venom drivers that went back and forth for the entire 6 minute main. Justin was able to use the Goose Bumps tires and Raptor SVT body to make a late pass and hold off the charge to secure the overall title. A3 of modified buggy continued the theme with tight battles as Justin caught the leader on the final lap, but contact with a back marker left Justin in second and taking second overall.

The JConcepts Punisher and Raptor bodies, green Goose Bumps and the various JConcepts front tires performed well all weekend, even on the bumpy surface allowing multiple wins and podiums, leading to a great start outdoors for the JConcepts team in the Northwest.