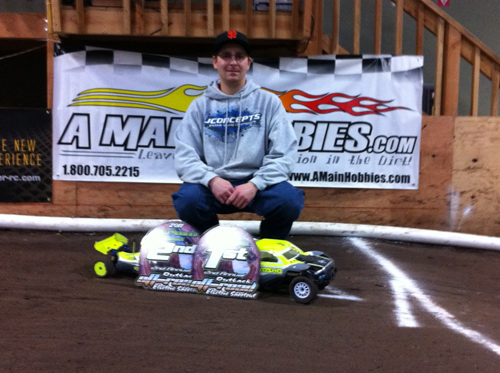 Outback Raceway once again hosted the 2nd Annual Outback Off Road Electric Shootout, where JConcepts left victorious. The event was ran on the super high bite indoor Outback Raceway track. With over 110 entries spread out amongst 7 classes, it made for a competitive weekend. Amongst other top racers, JConcepts drivers Eric Albano and Aaron Biner were on hand for the event. The Short Course Open class would prove to be one of the highly participated classes in the event. Team Associated driver Kevin Jelich would TQ the class. The main would provide much drama on the start as Kevin Jelich amd Aaron Biner would get out to the 1-2 positions. Biner would follow Jelich for the entire race. Every turn Biner looked for a place to pass on the narrow Outback Raceway lanes with nowhere to go. The two were separated by less than 1 second for the entire 8 minute race. On the very last turn of the last lap, Biner and Jelich would tumble across the line. The win wound up going to JConcepts driver Aaron Biner by less than .04 of a second! It was one of the closest finishes ever! Aaron chose Green Bar Code for his Kyosho Ultima SC-R. He also ran Blue Bar codes for 2wd/4wd Buggy and 4wd Front on his Lazer ZX-5 for a A Main 2nd place overall. It was a great weekend!