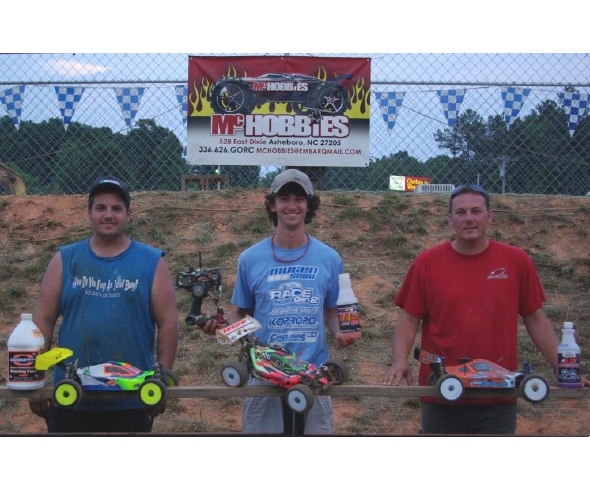 ZOO City raceway and McHobbies in Asheboro, NC hosted the 3rd round of the North Carolina Championship Series and it was the hottest day of racing thus far. With temps hovering around 90 degrees and no rain for the past couple weeks, the ZOO City track crew and Asheboro fire dept gave the track a primo treatment and dose of water on Friday to ensure great racing conditions. The track was butter smooth and held moisture for most of the day. As it dried, a groove formed and provided consistent racing action all day. For example, all 3 rounds of TQ’s for the Expert Buggy class was within 2 seconds each round, mistakes had to be minimal and corner speed was key. The race had 117 entries and through the pounding of 3 heats and mains, the track held together very well from start to finish.

In the Expert Buggy Class, JConcepts Team Driver Brandon Melton came out of the gate with two early TQ’s of round 1 and round 2, securing the overall TQ using qual points. In each of these rounds, Brandon equipped his RC8B with JConcepts Double Dee V2 in blue compound. JConcepts Team Driver Barry Pettit was also fast and in contention running Double Dee V2’s just missing TQ in the first round by .3 secs. The main event would have Melton stretch out a couple second lead on Pettit after a first lap bobble, and it would remain this way until the first round of pit stops. Melton would flame out in the pits which would let Pettit pull out about a 20 second lead. Barry stayed on pace and would finish strong and go on to win the main event. Melton would recover and come back to a 2nd place finish, giving JConcepts a 1,2 finish in Expert buggy.

In Expert Truggy Barry Pettit running Sevens in Blue Compound would convert an overall TQ into a win over Josh Hollifield in 2nd and John McGinty in 3rd. Josh was able to pace Barry early on but experience would take over and Pettit was able to pull away after a couple bobbles from Hollifield. Mike Webb was a factor early on making his truggy debut. Webb and Hollifield had and excellent race going for the 2 and 3 spot, but an early retirement from Webb would let Hollifield secure 2nd.

It was a great round and the series and racing action looks to carry it’s momentum into Cape Fear Raceway near Raleigh, NC. Cape Fear is the largest and most challenging track on the circuit, so it will be a sure test of man and machine to see who comes out on top.