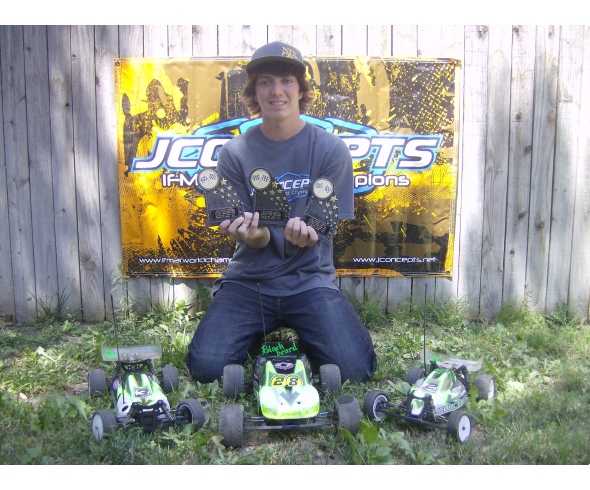 The Jimmy Babcock Racing League(JBRL) is in mid season right now in Southern California, and this past weekend was round 4 of the 8 race series. As the circuit traveled its way about an hour and a half north of Los Angeles to Bakersfield, Ca people as far as Las Vegas, Nv came to play. With it being Fathers Day weekend entries didn’t reach the normal JBRL attendance of 230+ but it did get a decent turnout of 175+ and the fun factor was still just as high as any other round. The track was different then most anyone will see in RC racing as Racers Haven lays a dust control substance(almost tar like) that makes the track hard as asphalt with plenty of grip, almost like blue groove. The unusual surface left people guessing on tire compounds, and I found that I had a little more car control and less tire wear with white compound Bar Codes, but some of the other JConcepts drivers and customers used orange compound.

In the first qualifiers for 13.5 4wd I took pole position and held it all day to end up taking the win in the A main event along with 4 other drivers using JC products in the A main. Next was 13.5 truck and it was a repeat of 4wd, took pole in the morning to hold it all day and win the A main with 3 others using Bar Codes. Now time for 13.5 2wd, this was a different story, I had TQ till the last heat came up and I watched as local, David Shepard, took it away from me. Starting second on the grid, I ended up getting to the top spot then losing it again after one crash and I had to settle for 3rd on the podium, which was filled by JConcepts users, along with the the 4 others in the A main that had Bar Codes on!!! Modified truck was won by team driver Brian Mcduffie, who also finished 3rd in Mod 4wd right in front of teammates Jimmy Barnett and Cody Turner. Those three drivers also ran Mod 2wd and Mcduffie again finished 3rd with Barnett 7th and Turner 8th.

All-in-all it was a fun weekend with lots of good results for JConcepts. With round 5 in 2 weeks at Pegasus Hobbies in Montclair, Ca the points battles continue to heat up in all the classes. Thank you to the whole JBRL and Racers Haven crew for an awesome weekend of racing.