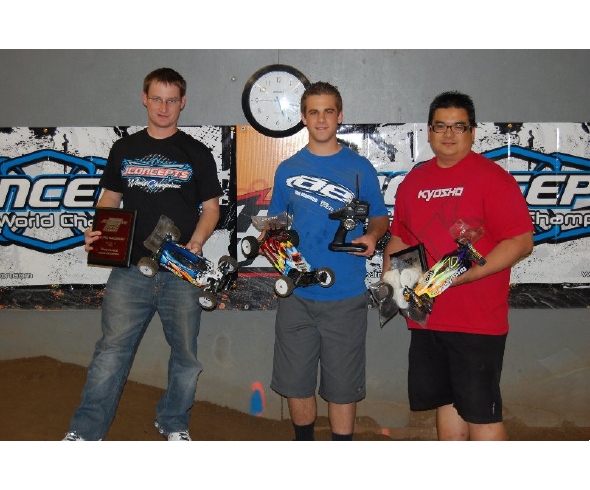 The JConcepts Wave race takes place in the heart of the R/C corridor, SoCal. One of the world’s premier indoor off-road facilities, ORCR Raceway has been chosen for 2 years in a row to host the event. With more than 100 indoor pit spots, as well as a fully stocked hobby shop and sizable indoor clay off-road track, the Wave’s venue and location are second to none. California locals were well represented with Steven Hartson, Brent Thielke, Cody Turner, Frank Root and Chris Jarosz taking part in the event. Drivers traveling in from out of town such as Nor Cal’s Lloyd Dassonville, Arizona’s Tanner Denney and Florida’s Jason Ruona provided tight competition all weekend.

Taking the event by storm was Associated / JConcepts driver Steven Hartson who took the TQ in 2wd modified, 4wd modified and 1/8th E-buggy classes. Steven’s vehicles were covered all weekend with JConcepts tires, wheels and bodies. Gold compound was the ticket for the moist indoor conditions at OCRC Raceway.

Traveling from Florida, Jason Ruona took the TQ position in the Short Course Modified class with teammate Tanner Denney qualifying in 2nd. Jason chose the SCT Double Dees tires on the front and Subcultures in the rear.

Lloyd Dassonville with his TQ Racing SX10T took the top qualifying position in the truck modified class. In the Super Stock 4wd Class Zack Rogers took his Associated B44 to the top of qualifying with consistency and smooth driving. Lloyd and Zack were also running the JConcepts Gold Compound Bar Codes front and rear.

During the main events Steven Hartson took a commanding lead in the 2wd modified class. However, the lead was not safe as a mechanical problem forced Steven out early with Lloyd Dassonville taking over 1st place with Brent Thielke in 2nd and Jason Ruona in 3rd. Lloyd’s TQ SX10 was also outfitted with JConcepts Gold Compound Bar Codes.

The Short Course Modified A-main was a thriller early-on as Ruona made an early mistake allowing Tanner Denney and Chris Jarosz into the top 2 positions. As the race wore on it was the consistent driving from Ruona which allowed him an almost insurmountable 1 lap lead. Finishing in the second position was teammate Tanner Denney. Both drivers were utilizing the all new SCT JConcepts Double Dees front tire and Subcultures rear tire.

In the 1/8th E-buggy class Steven Hartson put on a clinic with a perfect 10 minute drive putting a lap on the nearest competition. Steven’s RC8e was outfitted with JConcepts 1/8th Gold Bar Codes all the way around.

A big congratulations and thanks goes out to the entire crew and staff from OCRC raceway for putting on another successful event.