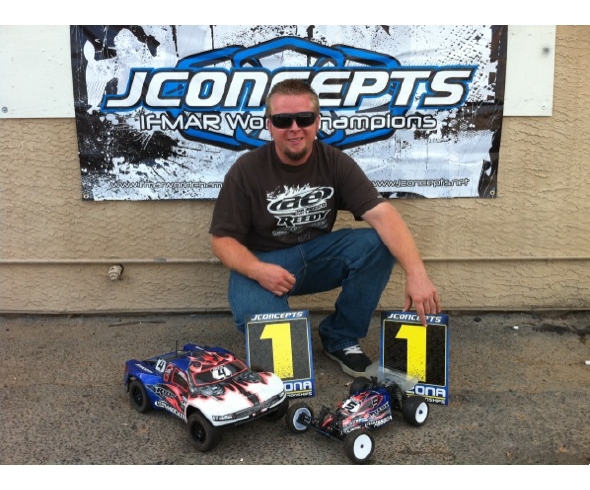 For the 25th year the fastest drivers in the southwest have gathered to compete for the chance to be named Arizona State Champion. The AZ states were held at the infamous SRS in Scottsdale Arizona. Over 150 cars hit the track, ranging from Stock buggy to 1/8th gas buggies. Arizona’s stars Ryan Maifield, Tanner Denney, and Jake Thayer, showed that they were ready to keep the trophies in the valley against drivers from California and the surrounding states. Ryan Cavalieri, Frank Root, and Cody Turner, looked to spoil the locals plans.

Under the tent JConcepts was showing off their new Punisher T4 body. All of the drivers were going crazy over the looks of the new body and couldn’t wait to get their hands on it. They loved how it made the truck look like a scaled down truggy. For more information visit www.jconcepts.net.

Friday afternoon drivers were able to hit the track for practice on SRS’s new layout. Most races at SRS are run wet, but twice a year the water is turned off and the track is grooved up. This year’s track was a very fast flowing track, which all the drivers liked. With the sun setting on Friday, the awesome track crew at SRS went to work making sure that the track was perfect for qualifying the next day.

As the sun came up on Saturday morning the temperature didn’t. With a cold front moving in over-night temps sat in the low 60’s all day. With much cooler track conditions, drivers had to make the switch to softer compound tires to achieve more grip.

The first pro class to hit the track for the AZ states was 2wd-modified buggy. JConcepts Ace Ryan Maifield rolled out on JConcepts Blue Barcodes. With the added traction of the softer compound, Maifield was able to lay an early run down that the rest of the field wouldn’t be able to match. In the second round of qualifying Maifield would again set a fast pace, but this time he was knocked off the top spot by JConcepts young gun Tanner Denney.

With the sun setting behind the mountains the 2wd buggies hit the track for the final time on Saturday. Cavalieri and Thayer both had very good runs to secure the second and third spots on the grid, but once again Maifield took his B4.1 to the top of the list.

The Modified Short Course class ended up being one of the most competitive classes of the weekend. The big trucks had no problems getting around the tight track, and putting on a great show for those watching. Just like 2wd buggy Ryan Maifield put his Associated Factory Team SC10 with JConcepts Barcodes and Ford Raptor body on the pole with TQ runs in rounds one and three. And Tanner Denney used the same combination to secure the second spot on the starting grid for Sunday’s mains.

The big SCT 4wd trucks were fun to watch on this layout. The larger jumps and tight 180’s allowed the drivers to drive very hard and beat on each other in the turns. JConcepts team driver Jake Thayer used Green Barcodes to put all the power to the ground in his Hoboa ST10. Minus a wheel coming loose in the second round of qualifying ending Thayer’s run early, Jake was the class of the field all weekend.

As everyone was loading up and heading out, most of the talk was about the chance of rain on Sunday. As the sun peeked over the hills on Sunday, the temperature outside was even cooler than the previous day. As racers unpacked their gear and started preparing for a long day of triple A mains, clouds began to roll in very fast. Within a very short time, the sky went from bright and sunny to dark and cloudy. With temperatures in the 50’s, drivers prepared for looser conditions on the track.

At the finishing horn of the first race of the day sounded, the sky opened up and poured for a few minutes. The dry track was able to soak up most of the water. After about an hour break, the first A main of mod 2wd buggy hit the grid. Maifield used his TQ starting spot to stretch an early lead over Cavalieri and the rest of the field. With Maifield checked out, the surprise was Kinwald who had worked his way through the field to the second spot. Four minutes into the six-minute race, sprinkles began to land on the track making it very difficult for the drivers to find traction. The race ended with Maifield taking the win and Kinwald and Cavalieri rounding out the podium for the first A main.

With another very wet track, the track crew decided to break again for an hour to see if the rain would pass. Drivers in the pits started mounting tires for wet track conditions, hoping that the rain would pass and racing would continue. Unfortunately the rains would keep falling, making the track unsafe for corner marshals. With only two races completed, finishing orders would have to be based off of qualifying points giving victories to several JConcepts drivers including Ryan Maifield and Jake Thayer.

The track crew at SRS proved this week why they are one of the best in the country. The track was great and I can’t wait to go back for this year’s Cactus Classic. A special thanks goes out to Richard Lake on the mic running a great program, and to Keoni, Jake, and all of the rest of the crew at SRS for all of their hard work. 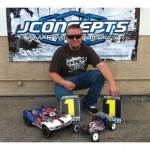 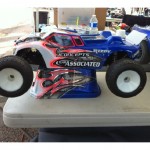 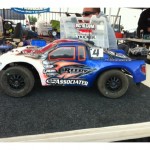 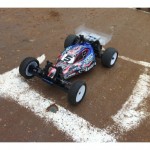 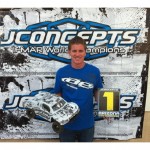