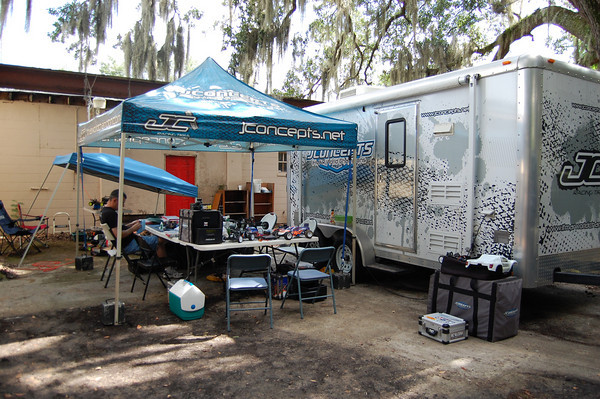 Business casual is the theme during the JConcepts Summer Tour events, mixing the pleasure of food and entertainment with the competitive racing of the popular Super Cup series. eXtreme Hobby Zone was the designated host track and with a fresh layout and fresh clay, drivers were ready for a continued battle. Race director Jimmie Cooper had the racers on task all day with a tightly run program.

Weather was in the vicinity but had no affect on racer turnout and preparation. A slight rain came down late Friday night which provided a grippy Saturday morning surface. A grippy surface quickly turned to slippery as it dried out and the hot tire was the JConcepts Flip Outs in green compound.

Just as racing started it was clear that the weather was not finished for the day. A slight sprinkling put some more water down which naturally increased grip for the drivers, thus quickening the track. Some drivers elected not to run for the fear of the “dirty” car but others were quick to take advantage of the extra traction.

After qualifying was completed, it was time for the eHz lunch special which was greatly appreciated. Moving on to the racing action, things got started in the stock classes with Jader Lopez taking the win in the 2wd stock class with his freshly prepped Kyosho RB5 buggy. Stock truck was owned by south Florida’s own Mike Applegate with his Losi XXX-T. Dave “Double Dee” Duncan took the win with his Factory Team SC10 in the stock SCT class.

Modified drivers were up next and JR Mitch took his SC10 Factory Team to the top spot in the modified SCT class. In the 2wd modified class it was Joe Davis with his B4 holding on in a close race. 4wd modified was intense with Joshua Wade coming out on top with his Academy 4wd buggy. Finishing off the day was Felix Law with the Slash 4×4 by taking the top spot in the Short Course 4×4 class.

Drivers in the winners circle: