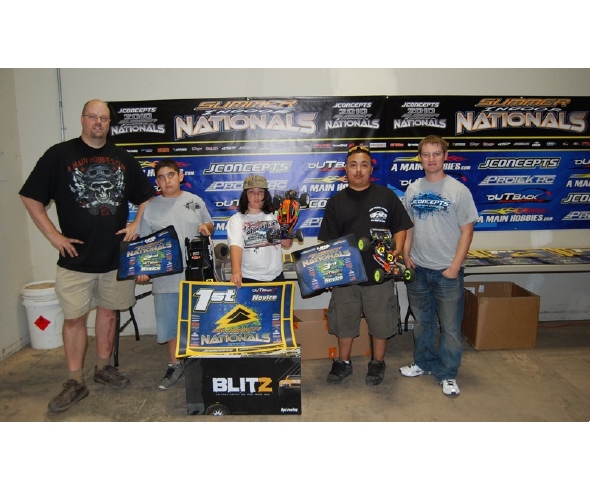 Qualifying started out on Saturday morning at 10:00am and it was JConcepts / Associated driver Cody Turner taking round 1 TQ in the 2wd modified class. Cody put in a near perfect run to hold the early TQ in the most popular class. Steven Hartson and Tyler Vik held the round 1 TQ in the 4wd modified and SCT modified classes respectively. It was clear early on whom the favorites were and as qualifying progressed, it appeared the fast only got faster.

Sunday morning began with open practice early in the morning with the 4th and final round of rocket round qualifying. After the conclusion of qualifying an extremely generous raffle / prize giveaway during lunch was offered. Everyone lined the track for the raffle anticipating being the big winner. It appeared almost everyone went home with something and some went home with multiple items including many kits. Mains were posted and drivers began fine tuning for the mains. With bump-up opportunities, it was clear that everyone had the same goal, that of bumping into the A-main.

4wd Short Course was the first A-main out of the gates and Kendall Bennett of A-main Hobbies took command driving the Slash 4×4. Kendall used a combination of timely passing, confident driving and raw power to his advantage. The race director had the crowd going wild with the leaders battling throughout. Kendall wins the first A-main of the day taking the 4wd Short Course class in style with a triple and quad jump on his victory lap.

The second A-main of the day was in the modified Short Course class with TQ Tyler Vik sitting on the pole position, Tanner Denney 2nd and Jason Ruona in 3rd. A rough start for Tyler put Tanner immediately into the lead with pressure coming from Ruona who was only a few feet behind. With Ruona looking to pass, Tanner made a small mistake in the “6-pack” section and Ruona overtook Denney and jumped into the lead. Experience was a factor with Ruona out front and not forcing the issue with traffic the lead grew to several seconds during the mid-race point of 4 minutes. Traffic tightened up which allowed Tanner to pull closer to the lead and with Tyler recovering from a poor start things began to get interesting. More traffic and a mistake by Tanner allowed Ruona to pull an even larger lead which he held to the finish winning in convincing fashion. Both Jason and Tanner’s SC10 Factory Team trucks were outfitted with JConcepts green compound Bar Codes all the way around, black Rulux wheels and Manta (Ruona) and Raptor (Denney) bodies.

Next up was the modified truck A-main where TQ Nathan Lavery was in a comfortable position out front of the pack. As the race started Nathan jumped out front and was running consistent and smooth with Randy Pike in 2nd and Zack Genova in 3rd. Zack began to push his JConcepts equipped T4 to the limits pulling up to contest Randy in 2nd. In a last ditch effort Zack motored up along side Randy coming on to the straight attempting a move toward the finish line. However, it was not to be as Randy held perfect ground and cruised in for a well deserved 2nd place with Zack Genova finishing 3rd. Nathan Lavery quietly drove the fastest, most consistent, race to finish in first. Nathan was rolling on JConcepts gold compound Bar Codes and Illuzion body all weekend.

The 4wd modified class was up next with local hero Tyler Vik sitting on pole position. Southern California driver Steven Hartson 2nd and Jason Ruona 3rd lined up behind Vik. However, it was young Tanner Denney who was most aggressive at the start of the race moving first into 3rd place and then into the lead after a side-by-side battle with Vik. Tanner looked comfortable and confident as Hartson recovered from a poor start and made his way into 2nd. Vik and Hartson maintained a close battle but consistent driving launched Hartson into second and chasing the lead. With 2 laps to go Tanner made a small mistake in the “6-pack” section allowing Steven to take the lead. Crossing first, Steven put another win under his belt with youngster Tanner Denney finishing in 2nd and Tyler Vik 3rd. JConcepts Gold Bar Codes were again the choice with a 1-2 finish.

Finishing off the day was the feature main event of the day in 2wd modified. TQ Steven Hartson fresh of the 4wd win was within striking distance of pulling off the double win but had a lot of competition behind eager to pull the upset. Steven was on a mission with his JConcepts equipped B4.1 as he pulled a steady lead. Tanner Denney also looked quite comfortable maintaining the 2nd position and upcoming driver Zach Rogers was sitting in 3rd. About mid-way through the race Tanner Denney put on a charge and began closing in the on the leader. Recognizing the gap difference Steven once again picked up the pace and picked up the win pulling off the “Double” for the weekend. Speedy Arizona native, Tanner Denney, maintained his position and finished 2nd and Zach Rogers 3rd. All 3 drivers looked to JConcepts Bar Codes in gold compound to tame the Outback Raceway indoor clay track conditions.

Outback Raceway and A-main Hobbies put on amazingly successful event, congratulations to all the winners and especially the staff on a terrific event