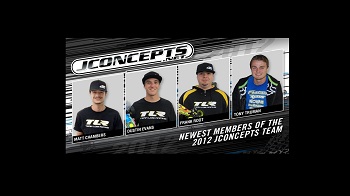 More driver news today from JConcepts as they lock up more of TLR’s top drivers plus a rising UK star. Read the press release below for more info:

Matt Chambers reaches agreement in 2012 to run the JConcepts tire line. The Denver, Colorado based TLR driver does his weekly racing at the Mile High R/C track while readying to strike at large events all over the World.

Matt had an amazing summer in 2011 as he represented Team USA at the IFMAR World Championships in Vassa, Finland and also qualified 2nd in the 2wd modified class at the ROAR Off-Road Nationals in Union City, CA. Matt’s smooth driving style awarded him an impressive qualifying result and overall finish at the largest 1/10th off-road event in the United States.

Look for Matt to start 2012 off with a bang at the Reedy Race of Champions where he will compete for the Invitational championship alongside several other team mates in the stacked International field.

I had the pleasure of spending some time with Matt during the IFMAR Worlds in Vassa, Finland and came away extremely impressed with his dedication and attention to setup and detail. Always one of the better looking vehicles on the track, Matt has a professional looking program while achieving stellar results. I’m looking forward to a great year. – Jason Ruona

“I have always had a lot of respect for Jason and his vision for the JConcepts brand. It’s easy to see that JConcepts is dedicated to making the highest quality r/c tires. When it came time for me to choose a tire sponsor for my TLR vehicles in 2012, the choice was clear. I am very excited to be joining the JConcepts team and am looking forward to working with Jason and the rest of the team in 2012. It’s going to be a great year! – Matt Chambers

JConcepts is pleased to welcome 2011 ROAR National Champion Dustin Evans to the 2012 racing team. One of TLR’s top drivers, Dustin brings versatility to an already speedy JConcepts driver line-up. The Denver, Colorado, native has ascended through the World rankings and established himself as a winner while being one of the few drivers capable of competing in 7 different classes of competition.

TLR’s Dustin Evans struck early and often in 2011 with an Invitational victory at the Reedy International Race of Champions and maintained his winning ways at races such as the Short Course Showdown, JConcepts Fall Indoor Nationals and Hot Rod Shootout. Dustin peaked during the ROAR Off-Road Nationals where he was able to take home the prestigious 2wd modified National Championship.

Dustin will begin a busy 2012 race season for TLR / JConcepts as he looks to repeat at the Reedy Race of Champions and then immediately turn his attention to the Dirt Nitro Challenge where he will make a 2012 1/8th off-road debut while he readies for the IFMAR World Championships later this year.

“It’s an amazing time at JConcepts. Signing a driver of Dustin’s skill level and character has been a dream come true. Having the opportunity to stable one of the top drivers from both TLR and Team Associated at the same time gives us one of the most potent combinations in the industry. Dustin has the personality, flare and magic that we look for at JConcepts. I can’t wait to get started.” – Jason Ruona

JConcepts welcomes returning driver Frank Root to the 2012 race team. One of the most dedicated drivers in the industry, Frank joins JConcepts as a driver specializing in 1/10th off-road and SCT. A top driver for the TLR race team in Southern California, Frank has a passion for the hobby which allows him to blend with top level racers and enthusiasts alike.

Frank will begin 2012 as one of the favorites in the Open class at the Reedy International Race of Champions and a returning champion to Southern California’s popular, Jimmy Babcock Racing League.

“I’ve known Frank for quite some time and I always marvel at his enthusiasm for the hobby. Frank’s race preparation and ability to relate to customers in person and through social media symbolizes what being sponsored is all about. We are excited to bring Frank back to JConcepts and have him representing JConcepts tires and inserts on his TLR line-up of vehicles.” – Jason Ruona

“I am extremely excited to be back with JConcepts for the 2012. Jason has continuously developed tires and inserts that make JConcepts the leading edge of performance. I know that using JConcepts tires and inserts will give me the best chance to get my TLR vehicles on to the top steps of the podium at many races during the 2012 season.” – Frank Root

UK based driver Tony Truman has signed with the JConcepts Racing Team. A dedicated driver on the circuit, Tony has established himself as a multifaceted driver specializing in 1/10th and 1/8th off-road. In 2011, Tony made a complete trek around attending many regional and national events in the UK and also attended large European based events such as Neobuggy and the 1/8th Euros. Look for another big traveling year in 2012 as Tony looks to ascend and become one of the most complete drivers in the UK.

I had the pleasure of meeting Tony at our first ever Clash event in 2007 and I was really impressed with his driving during that event. We have stayed in touch throughout the years and have always remained close during large traveling events. It’s been exciting to see Tony’s growth in R/C and we are extremely happy to have him on the JConcepts team in 2012. – Jason Ruona

“I’m excited at the opportunity to join the JConcepts team. I have known Jason and the JConcepts family for many years and I have always admired the products and the way they work, from designing hot looking bodies to great performing tyres. I look forward to racing and working with them for the foreseeable future and picking up some good results along the way.” 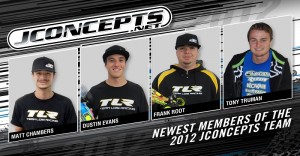