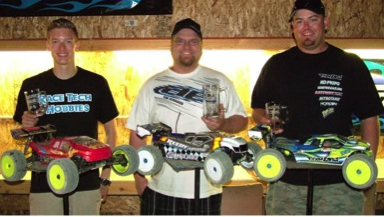 The dust has settled on another great year of racing in the Northwest Championship Tour. The Tour starting in 2005 and Celebrating its 5th year anniversary in 2010. With racers coming from Washington, Idaho, Montana, Oregon and British Columbia, Canada. Racing was spread over a six month period from April to September. Tour races were held at Wenatchee WA, Spokane WA, and Bellingham WA. Lewiston Id and Pasco WA. JConcepts driver Mike Hudson took the overall points win in 1/8 Truck and 3rd in 1/8 Buggy. It was a very close points battle the whole series with both titles up for grabs the last round. With a win at the 3rd round of the Tour and several podium finishes Mike was able to win the title for JConcepts.