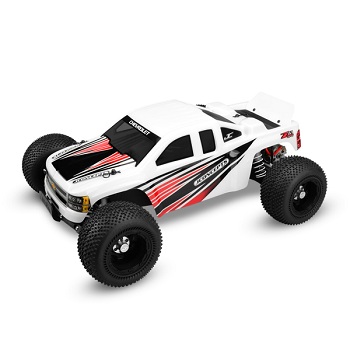 JConcepts releases a new Chevy truck body for the Traxxas Rustler XL-5, plus a new overtray for Traxxas low CG chassis vehicles like the Rally and Slash 4×4 Platinum. Check out all the details in the press release below:

Wherever you are, you’ll see a Chevy Silverado on the job. Chevy Silverado and JConcepts – work hard, play hard. Like a rock. Never one to relax, JConcepts introduces the 2012 Chevy Silverado 1500 body for the Traxxas Rustler. Starting with its low-profile design, beefy fenders and noteworthy Silverado appearance, the 1500 body is inspired by the looks of a class leading full-size pick-up, loaded with performance features. Fitting directly on the popular Traxxas Rustler line of vehicles, the Chevy 1500 is just what you have been looking for.

The JConcepts body is a racer starting with the slammed look and blended 1:1 inspired appearance. The Chevy 1500 pops out as a high-voltage performer and packs in the detailed design you have come to expect from JConcepts. Extruded front and rear fender flares for maximum tire and linkage clearance include a slight hood-scoop raised portion to bulk up the front-end. The rear bed has built-in clearance for the Rustler shock tower and shocks to help maintain that sleek appearance. The body comes included with a spoiler on the back of the body mold which can be trimmed and detailed to drop right on the rear and secured with 2 included JConcepts button head screws.

Whether you start your day on the race track or in the back-yard, the Silverado packs a serious punch straight out of the package. The head-light and grill treatment scream Chevrolet while the decal package helps the bow-tie truck standout from the competition. 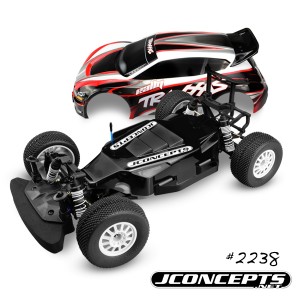 When racing on a loamy or top soil track surface the inside of the Low CG Slash or Rally chassis can become loaded with dirt or debris which creates extra weight. With the JConcepts over-tray these worries are minimized with the simple and functional over-tray. Fitting nicely under the body; the JConcepts over-tray hugs the outside dimension of the Low CG Slash and Rally chassis protecting the inside from unwanted excess dirt and debris build-up during racing conditions.

The over-tray fits snug around the entire chassis structure while being attached in the front with hook and loop tape (or Velcro if you prefer) for easy access. The over-tray is built with extra height and rake to provide extra room for various electrical and battery configurations.

The back-side of the louvers can be cut out for air to escape. Holes can be added anywhere to release air but will add to possible debris build-up inside the over-tray. The over-trays are designed for the stock Traxxas power and electric or updated systems with compatible power.