We first told you about these new turnbuckles when they were spotted at the 2013 Reedy International Off-Road Race of Champions, and now they have been officially released to the general public. Check out more info in the press release below:

JConcepts is Titanium with the introduction of the Fin turnbuckle sets designed specifically for style, durability and performance. The base of the shafts design is centered around a .143” titanium hex size which gradually tapers down into a 3mm thread base design which accepts standard JC and AE ball-cup configurations. The focus of the styling surrounds the lengthened adjustment hex area and the “finned” cuts that rotate about the center. The fin turnbuckles are lightweight and the original design brings out the glamour and quality that makes titanium one of the most sought after exotic materials in the world. The JConcepts turnbuckles are produced with left and right hand threads with the left being conveniently marked for easy orientation. 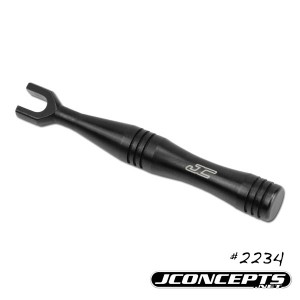 An aftermarket adjustment wrench offered by JConcepts is available separately for ease of adjustment on JConcepts and Lunsford turnbuckles. The wrench is made of steel material and features a stout adjustment and handle area for handy pitting. The Fin turnbuckle wrench has been laser marked with JC for authentication and is the perfect complement to any tool set. The wrench is sized to fit just about anywhere in a racers toolbox and is the quick hit accessory for racers utilizing the new Fin turnbuckles by JConcepts.