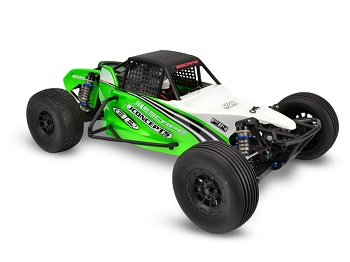 JConcepts releases the 1st aftermarket body for the Team Associated SC10B short course buggy. This body features a reversed hood-scoop for more air relief, chiseled side-ducts, raised number plates, and much, much more. Check out the press release below for all the details:

Escape to a place where short course buggies are the leading entry into the world of Short Course racing. Introducing the Escape body by JConcepts, specifically designed for the newly released Team Associated SC10B vehicle. Breaking into the world of Short Course buggy racing, JConcepts has stepped up with the first aftermarket body designed around the new high-energy vehicle. It’s not a buggy unless it jumps, steers and feels precise and JConcepts has not left the Escape body alone in its attention to performance detail.

The first thing noticed on the Escape is its narrowed front-end which tucks nicely against the chassis geometry. The increased front tuck tightens up the large gap in-between the chassis and stock SC10B body making the Escape a superior jumping body with its first heavy detail. Just above the tucked portion, in front of the ****-pit area, rests a reverse scoop giving an area to trim for more air-relief. A small ledge entering the cab guides the air slightly further than the original body while the main side-pods have chiseled ducts which wrap around the bolt-on plastic caging. Just behind the roll-cage area, number plates are built into the body giving the body a slightly raked look and appropriate place for small racing numbers.

The rear bolt-on fenders skirt the rear of body slightly more than stock, allowing the Escape to flow front to back as a pure racing inspired body. In addition, each Escape body includes a ground-up JConcepts driver pit which highlights control panels, shifting exploits and a suited up race driver which features seat-belt and suit details. The rear of the driver pit places a raised panel section emulating an engine compartment with cooling bits scattered across to bring excess realism to the body.

Finish off the Escape body and driver pit with included Escape decal sheet and complete the driver pit by installing the (not included) stock AE helmet to the JC driver pit. Bolt-on the body to AE roll-cage (not included) to complete the assembly and drop-on the Escape body to show off the latest in JConcepts Short Course buggy design and development. Escape the rest, JConcepts is best.