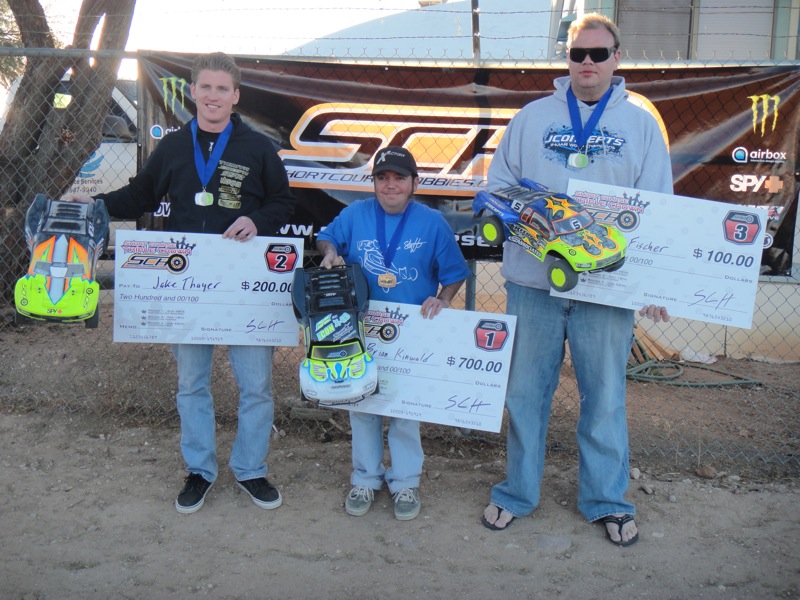 JConcepts dominated the short course triple crown last weekend, ending a Wild West shootout in Arizona. Three men entered, and one walked out The Champion. This year the KBRL held the Short Course Triple Crown series. The three race series brought the best racing talent the state had to offer. Heading into the final race of the Triple Crown series the title was still up for grabs between three JConcepts Team Drivers, Brian Kinwald, Jake Thayer, and Billy Fischer. The man with the best finish was going to be taking home the big check.

The final race of the series was held at Canyon Vista racetrack. In qualifying Casey Peck showed that he had the speed to run with the top three guys by TQing the Mod Short Course class, with Kinwald, Thayer, and Fischer 3rd, 4th, and 5th on the grid. The first lap of the race is where all of the drama would unfold; a crash by the second place car would collect Kinwald knocking him back behind both Thayer and Fischer. With a long 10-minute race in front of them, it was going to be a battle to the finish. With all of the drivers back on all fours the action would stay intense for the remainder of the race. Five minutes into the race Peck would give up the lead to JConcepts Team Driver Billy Fischer, at the same time a few position back Kinwald would be able to get around Thayer to move into third. Seven minutes into the race Peck would have motor issues causing him to drop out of the race. With only three minutes left, the top three would find themselves battling for the championship. As the horn sounded the drivers would cross the line in the order of Fischer, Kinwald, and Thayer, now the real fun began. Each driver had a first, second, and third place finish in the series, so it was going to come down to bonus points and tiebreakers, to determine the champion. Fischer was unable to pick up any TQ points, so he would have to settle for third in points. Thayer and Kinwald each picked up a TQ in the first two races, so the overall champion was based on the finishing order of this race, handing the championship to Brian Kinwald.

Congratulations to all three JConcepts Team Drivers on finishing in the top three of the 2010 KBRL Short Course Hobbies Triple Crown. All three drivers used JConcepts bodies and tires to dominate the rest of the competition. To find out more information on these products visit www.jconcepts.net.