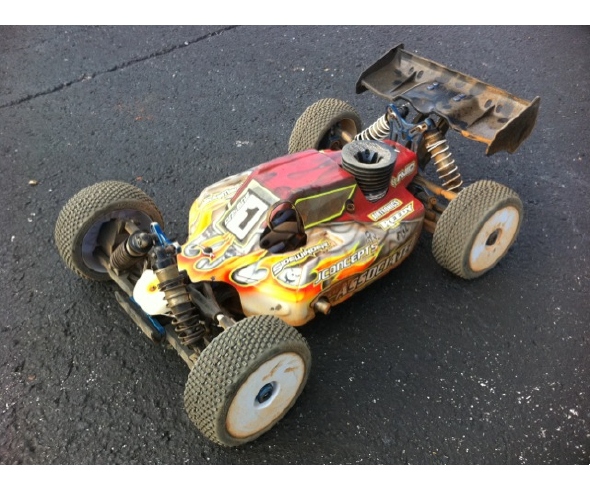 Every year in Florida, the long hot racing summer series comes to an end with the Florida State Series Banquet race. This year was wrapped up with some of the fastest drivers in Florida going at it on the track one last time, before the 2011 series begins. Triple Nickel Raceway in Bartow Florida is one of the roughest tracks you will find in Florida.

JR Mitch showed up ready to attack the track in qualifying Saturday morning. With only two rounds of qualifying, JR knew that it would be important to put a fast run in the first round. JR rolled off with JConcepts Subcultures (Green) for the first round and was able to hold off the rest of the field, to take TQ for the round. As the day went on and the track dried out, ruts and holes started appearing all over the track. With lap times slowing down, Mitch’s first run would end up being the fastest run throughout the two rounds and give him the overall TQ.

With the tough track conditions JR made the call to start the long Expert Buggy A Main with JConcepts Cross Bows (Blue) to help him get through the bumps better and ensure he had enough tread to finish the long main.
At the sound of the horn, all ten buggies went screaming down the front straight into the first turn. Mitch started out front, but wouldn’t stay there long. Crashing twice on the first lap, JR would find himself in traffic at the back of the pack. With JR’s early crash, Billy Easton would capture the lead, and start to stretch it out on JConcepts driver JP Tirronen who started third in the field. Billy would lead until he was sidelined with mechanical problems just before the first set of pit stops. With Easton’s car troubles, Tirronen showed the speed and control to hold off the field for ten minutes, until he was forced to retire from the race with car problems. This left the door wide open for JR to return to the top of the field, and take the win. Kawri Brown and Danny Torro would round out the top 3 on the series last race of the year.