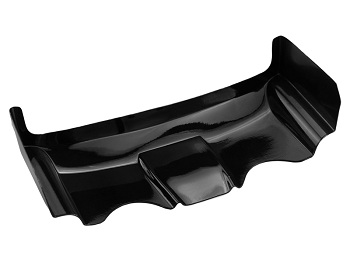 This new wing fits both the B4 and B44 buggies and it uses a wider base to provide more stability during low and high speeds. Check out more info in the press release below:

One of most popular wings for 1/10th off-road buggies remains the 6.5” Hi-Clearance wing by JConcepts. Introduced during the 2011 IFMAR World Championships in Vaasa, Finland, the Hi-Clearance has shown incredible performance on all sort of circuits while fitting nicely on a vast number of 1/10th buggies. For 2013, JConcepts has brought a 7” wide version to the development table and introduced it to competition during the Reedy Race of Champions.

A slightly wider base gives the wing a larger surface area which allows more stability during low and high speeds which provide some much needed grip in tricky situations. The Hi-Clearance sections near the end plates still allow maximum suspension compression and tire expansion. The 7” wing has quickly rose to the top of competition in 2013 with Jason Ruona taking TQ and first place at the Super Cup Championship Series while using it on the B44.2 vehicle.