From JConcepts:
JConcepts is pleased to announce the 7th year of the Indoor National Series. With a host of sponsors, the INS7 series promises to be one of the best yet, including the consistency of solid locations of the past and a visit to one of the nation’s newest locations, Hobby Action R/C Raceway.

About the Indoor National Series –

Are you ready to take the National title? 6 years ago, JConcepts along with many fine tracks and sponsors, united to create the first indoor nationwide race series that traveled to 5 different tracks across America dedicated for racers and enthusiasts. This creation became an instant classic. With over 6,000 entries and counting, the JConcepts Indoor National Series has become ‘THE’ race for racers to showcase their driving skills on a national and regional level while testing themselves against some of the industry’s best drivers. Known for its exciting mix of friendly, fun, world class racing atmosphere, the racing roots of the INS remain unchanged, but is devoted in making 2017 a breakout year in terms of series participation, factory drivers, representatives and professionalism. Also, the 2017 JConcepts Indoor National Series is destined to be a special year with the addition of the highly anticipated Hobby Action R/C Raceway added to the Summer schedule. This is a series you don’t want to miss!

Making sure the INS gets the best in news media coverage, JConcepts has once again teamed up with RedRC.net for 2017 to provide the industry’s best photos, stories, and media coverage to make the 2017 JConcepts Indoor National Series an unforgettable race experience. Come join us!

The 5 race series takes on the seasonal format of Winter, Spring, Summer and Fall Nationals races that will be held at fixed locations while the final race will serve as the end of year bash for awards and series championship presentation. All events will be awarded separately and collectively so those concerned about commitment will be recognized for performance regardless of series participation. City destinations, track facilities, and competition level have all been weighed and evaluated ahead of time so rest assured the experience and atmosphere is worthy, now it’s up to you.

Are you ready, for more info please visit www.indoornationals.com 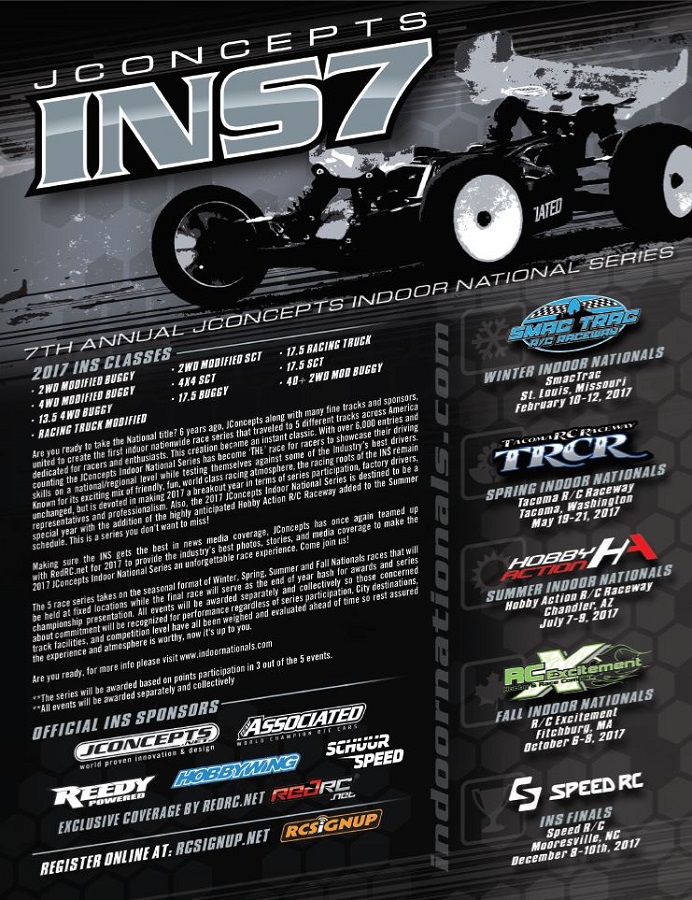