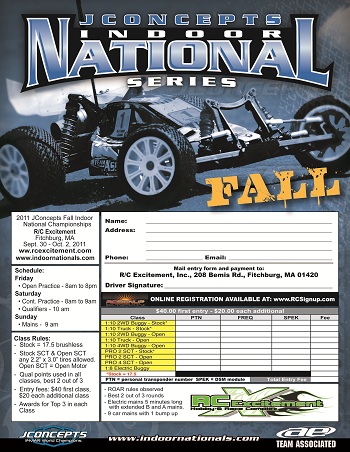 September 30th – October 2nd in Fitchburg, MA drivers will converge at R/C Excitement for the last round of the JConcepts Indoor Nationals Series.    For the 2011 event, Todd Anderson and the R/C Excitement crew will be burning the midnight oil providing the racers with the track, layout and facility known as one of the best in the Northeastern portion of the United States.    During the 2010 event, drivers traveled in from 17 different states to compete, solidifying it as a can’t miss race.

Many of the popular classes of competition will be offered featuring all the 1/10th off-road, Short Course, and 1/8th e-buggy classes.   Reserve the dates, book the trip and signup via RCsignup for the 2011 Fall Indoor Nationals today.   Stay up-to-date by visiting the 2011 Fall Indoor Nationals on Facebook or by visiting www.indoornationalseries.com

About the Indoor National Series –

Are you ready to be the first Indoor National Champion? Do you have what it takes to be the best in the Nation on an Indoor circuit? For 2011, JConcepts, together with Team Associated and the participating race tracks, have organized a first of its kind, true Indoor National Series. Scheduled as a 4 race series across the United States, drivers now have the opportunity to showcase their abilities on a national and regional level.    All events will be awarded separately and collectively so those worried about a commitment will be recognized for performance regardless of series participation.

Jason Ruona, president of JConcepts along with Team Associated race team manager Brent Thielke have made the commitment and are attending each race in support of this new series.  Team Associated / JConcepts drivers, Ryan Maifield, Steven Hartson and Tanner Denney highlight just a small portion of the attending drivers traveling from across the United States to compete at select events.  Commitments from many other drivers are coming in on a daily basis.

Race 4 (September 30th-October 2nd, 2011) is coming up quickly and there are already a number of surprises shaping up.  Brent Thielke,  Steven Hartson, Tanner Denney and Josh Numan are tentatively scheduled to attend the event.   JConcepts drivers and Jason Ruona will be on hand releasing new JConcepts products to the public for the first-time.   Are you ready?