From JConcepts:
It all started with a 1974 Ford F-250. Originally purchased to take on camping trips and for 4-wheeling, Bob Chandler, and his “BIGFOOT”® truck created an entire industry. Performing the first car crush in front of a crowd, BIGFOOT created a legacy that has withstood the test of time. Over the past 47 years there have been many specialty-built vehicles in the world, but nothing quite like “The Original Monster Truck.”

Carrying a pick-up truck body and driving on 66″ tires for many years, the team from Pacific, Missouri, have literally done it all in the world of Monster Trucks. With 8 Hollywood movies to its credit, a visitor to 34 different countries, BIGFOOT is worldwide. With flash photography lighting up stadiums around the world and video equipment rolling, BIGFOOT with Bob and Marilyn Chandler, Jim Kramer and ace drivers like Dan Runte have thrilled millions of fans. Simply put, there is nothing quite like a BIGFOOT moment.

In the world of RC, Monster Trucks have had a tremendous impact. Since the 1980’s, many of the best-selling vehicles have added the monstrous tag to garner attention, and, low and behold, it has worked. As RC monster trucks continue to thrive, body shell options, decal packages and hop-ups are always in high-demand. Screaming for new options from Losi with the LMT and the SMT10 from Axial have fueled the need for capable products to withstand monster truck racing and bashing.

JConcepts has teamed up with BIGFOOT® 4×4 to offer officially licensed decal sets to go along with branded body shells. Most fans recognize the Racer Stripe scheme as the moment BIGFOOT upped the ante in design, safety, and competition handling. The addition of the yellow and red stripes said it all back in 1990, and it seems, every incarnation of The Original Monster Truck is compared to the Racer Stripe. During the 2015 racing season, top driver Dan Runte was topped off with the Racer scheme for one of the largest events of the year at Charlotte Motor Speedway at the Back-to-School Monster Truck Bash.

Dan was unstoppable that night, taking the victory for the BIGFOOT Team at one of the most difficult events on the calendar. The Ford Raptor body, topped off with BIGFOOT Blue paint, modified racing stripes and miscellaneous sponsor logos was a hit on and off the track. The JConcepts design team worked diligently on turning another iconic body into reality for the RC enthusiast. The long stripes fit into place and follow the lower and upper body lines perfectly. The classic and powerful BIGFOOT logo sets the tone on the door space while highly contributing sponsor logos round out the fit and finish. A normally laborious process of detailing a racing body has been simplified by the JConcepts team giving racers more time to play and less time preparing.

The included body shell, a 2010 Ford Raptor, is the work of the JConcepts crew always looking to offer the best performing and most accurate presentation on the market. As the most radical off-road production pickup ever, the Ford F-150 SVT Raptor makes the perfect monster truck body. Back in 2010, JConcepts was the first to deliver a Ford Raptor body to RC enthusiasts and now, the first to deliver it to the solid axle monster truck community. From a toughness standpoint, nothing appears as mean as a Raptor and that fits right in with the big tire genre of monster truck racing.

As the 1:1 trucks hit the mid-2000’s, they were looking for a body to spice up their act, look more racy and add another dimension to the appearance. A lot of the teams raced to market the first “trophy truck” body or desert themed monster truck and a new generation started. On the RC side of things, the option just did not exist which left a lot of scale monster truckers scratching their heads while trying to come up with that look for the scale counterparts.

When it comes to racing, JConcepts is all-in and decided it was time to unveil the Raptor. During the 2018 Open House located at the Bigfoot 4×4 headquarters in Pacific, Missouri, JConcepts pulled the tarp off its most detailed RC monster truck design yet. Inspired from the kings of the business, JConcepts delivered on styling the Ford with large wheel well openings, sculptured cab, recessed windows, hood scoop and race tucked rear fenders.

The beauty of the JConcepts shell is that it works well on several solid axle trucks on the market but is also adjustable in wheelbase fitting trucks from 12” to 13” long. The race proven extra cab look allows ample room to mount the body on an LMT or Axial SMT10 and still packs a mean punch mounted on custom “shafty” and clod buster-based rigs. The flat bed area can be left clear during the painting process or detailed exactly how the user wants to replicate their favorite monster.

The body arrives clear. For best results, trim, mount, and prep body prior to paint or decals. After trim, clean body with soap and water and allow to dry. Use included window masks and apply to the inside prior to painting. Paint the inside of the body with polycarbonate approved paint only. In this case, a blue will be used and apply light and thin coats to cover evenly and allow too completely dry.

Start decal application by lining up and covering large areas. Spend extra time with the racing stripes when applying over corners and overlap wheel well cut-outs, come back later and trim with a precision blade, the excess that overruns trimmed areas. Apply miscellaneous branding, sponsor logos, place headlights and grille of choice and it’s time to #gojconcepts.

Complete and protected decal sheet for the JConcepts clear body 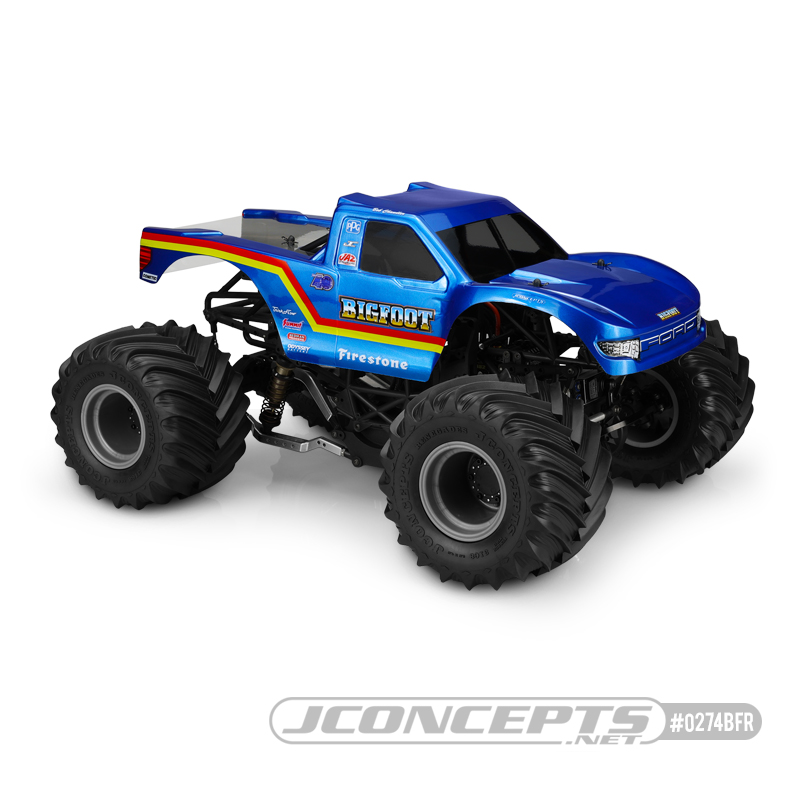 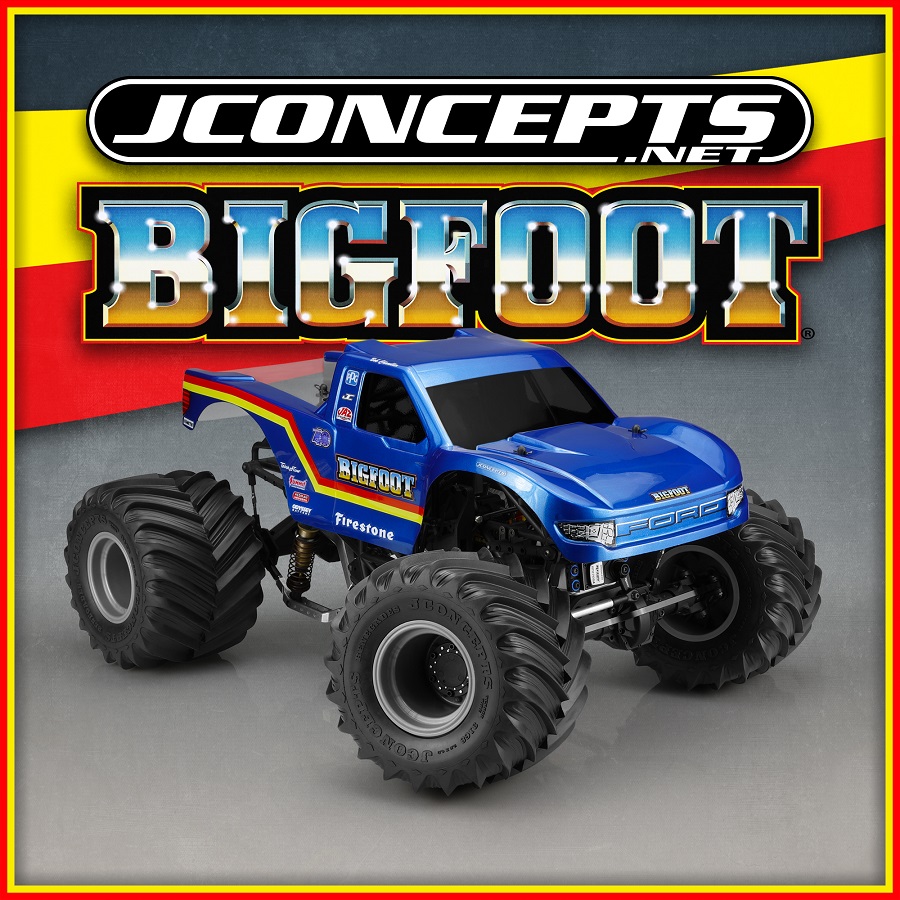 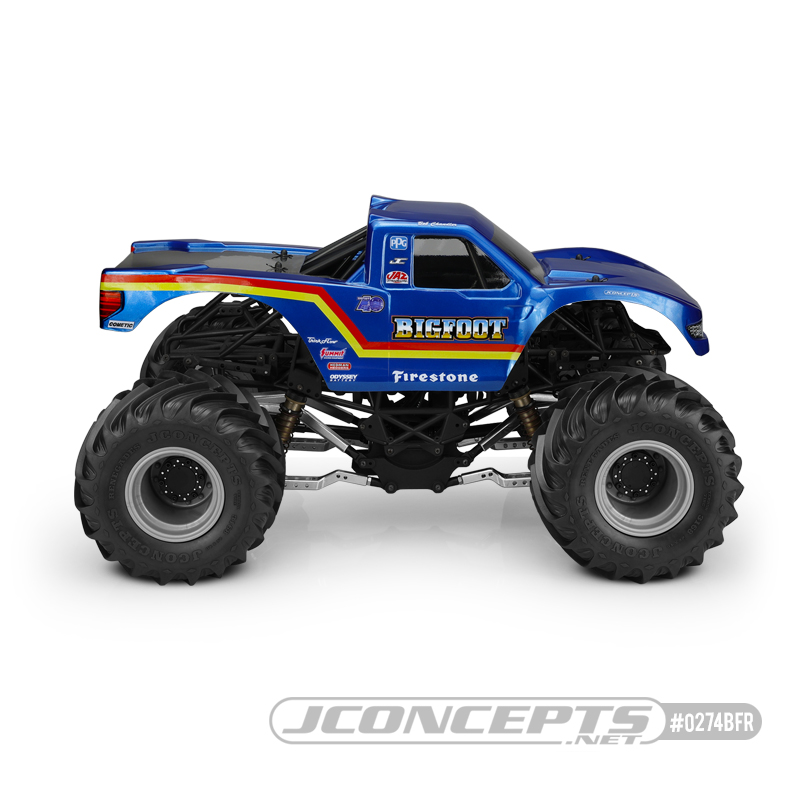 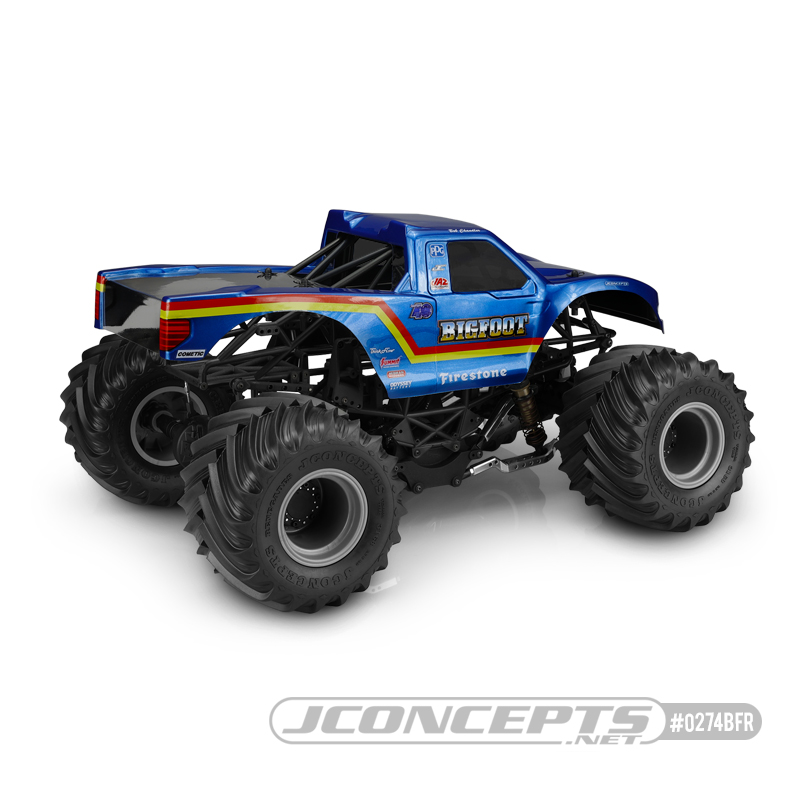 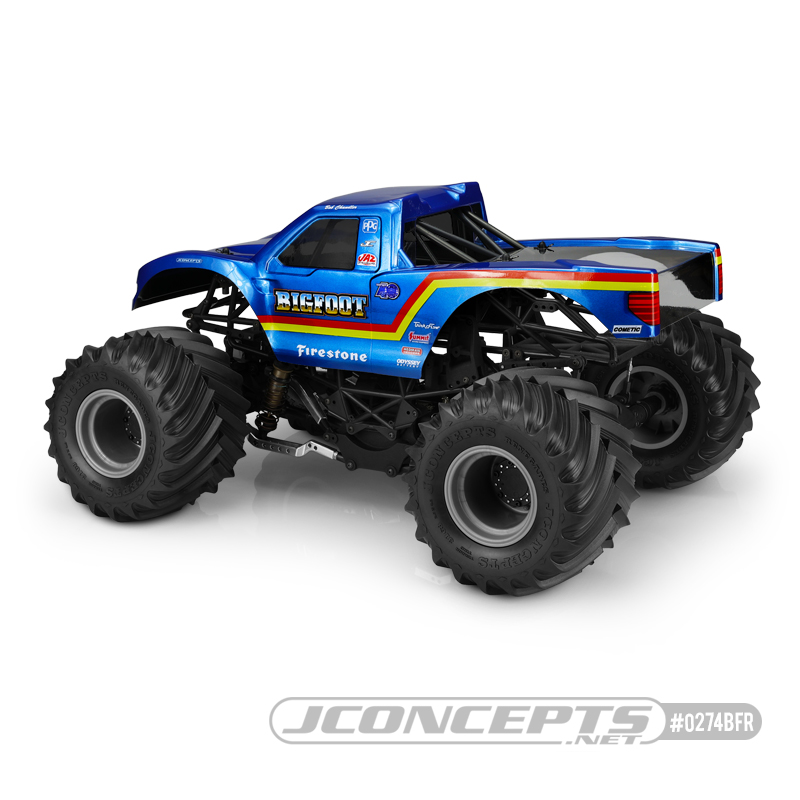