Sometimes it’s necessary to enter a new market with a shocking new product or discovery. JConcepts enters the R/C Drag racing community with a highly sought-after original. The 1966 Chevrolet II Nova is a classic, and with this vintage styling, a lot of thought was put into the design to incorporate the detail in to this legacy superstar.

This 1966 Chevy II Nova shows off an extensive sharp-edged restyle based in part on the Super Nova concept vehicle. In general, proportions are squared up and features including a bold grille and semi-fastback roofline highlight the shape. “Humped” fenders in an angular rear-end were reminiscent of other Chevrolets from the era of style.

To bring the Street Eliminator product to market, JConcepts worked together with Chevrolet to incorporate the heritage while also including options to bring out the street racer appeal. The main shell is comprised of three pieces which includes intricate detail for the front and rear. The front-end closure shows off the single headlight style with deep recessed sections along the grille and front bumper to faithfully replicate the original.

The rear closure section includes bumper detail, trunk works and vertical taillight cues. Aligning the front and rear sections are critical, but after a little paint and detailing, the Chevy comes together in magical fashion. In addition, the design team added a rear wing sectional to the project to bring the drag racing inspiration to life. The two-piece rear wing is trunk mounted with a lower support and upper wing with high-speed stabilizing ribs for added performance.

JConcepts relied on its strength of team drivers and enthusiasts for this creation. The research team attended the 2017 Super Nationals at Texas Motor Speedway. Fred Reep and JD Crow displayed the new body as a first look to a crowded field of R/C drag racers. The JConcepts prototype was mounted on a Traxxas Slash 2wd base vehicle converted to drag racer. The build team constructed the vehicle using as many stock Traxxas components as possible including Bandit suspension arms and Big Bore performance shocks.

The end result has the Slash / Bandit combo ready to race for street eliminations in any bracket racing formula. A complete decal package was custom created and fit to each section of the body. Licensing approval was completed in September of 2017 with Chevrolet for the most authentic look and finish. Photos, video and production shots followed up to the official release. For a complete look into the build, follow our story located on the JConcepts Garage.

Note – Building the Chevy II Nova is extremely detailed oriented and the 3-piece design of the body requires some expert level trimming and fitment. Once aligned, use a light amount of double sided tape or shoe goo (not included) to secure the front and rear sections. The lower rear wing support is also mounted carefully to the trunk using double sided tape or shoe goo (not included). The upper wing section sets down and provides the look and finishing touch to the 66 Chevy project.

The Chevy II Nova measures a 13″ wheelbase and the inside dimensions of the body are 10.75″ wide front and 11″ rear. The body is built for a 2wd SCT wheelbase length and narrowed to more resemble the original 1:1 counterpart. It’s helpful to plan your build, take measurements and modify your platform to fit inside the boundaries of the Chevy body. 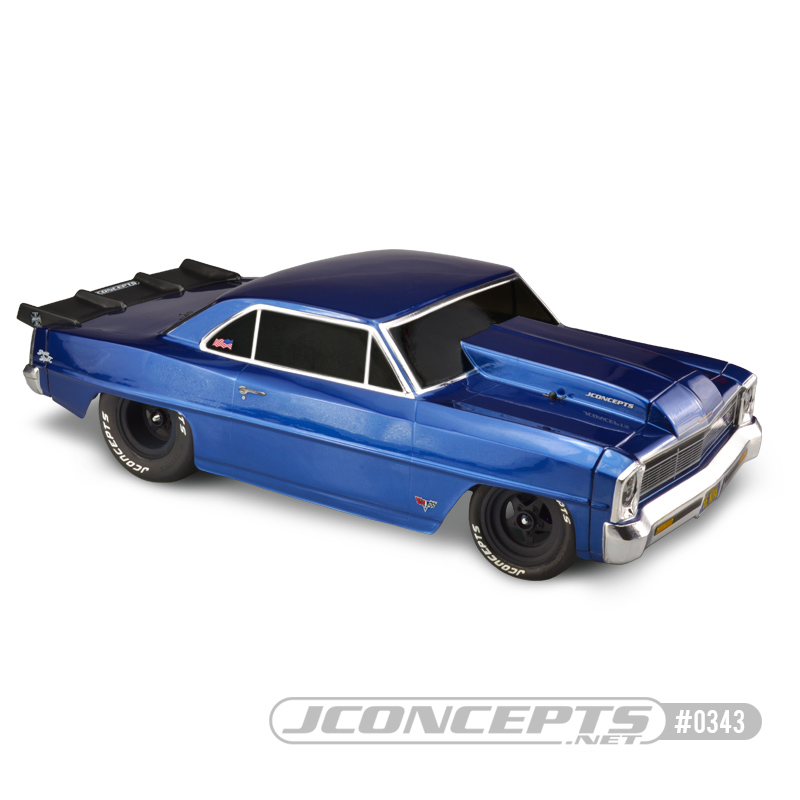 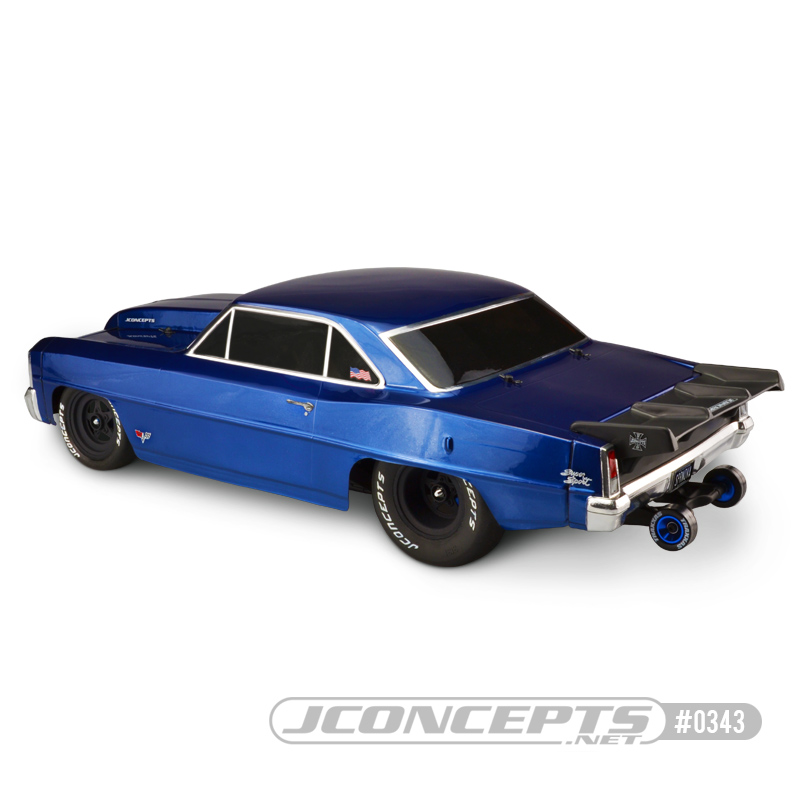 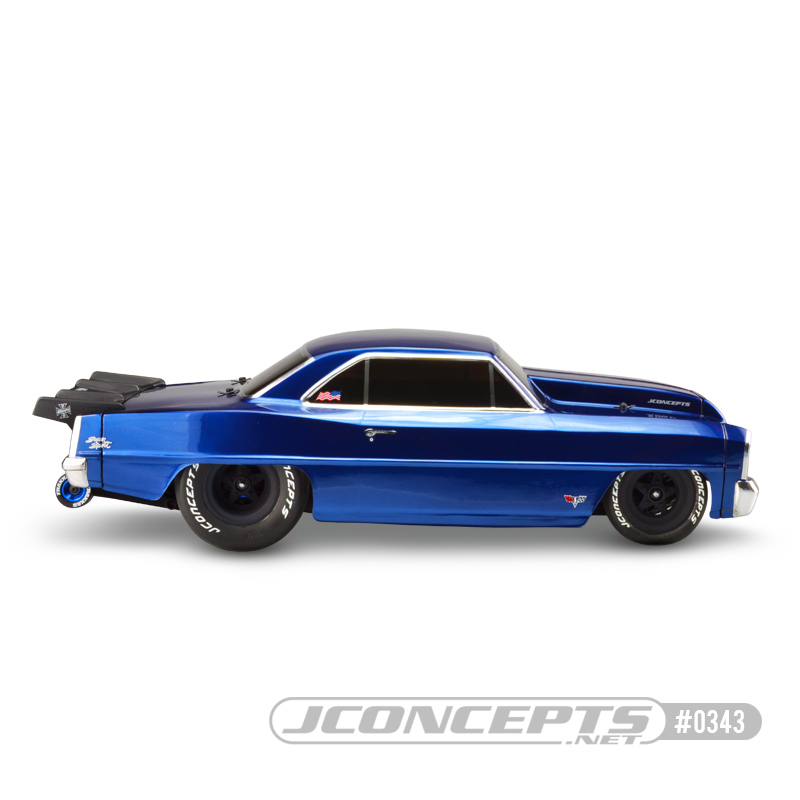 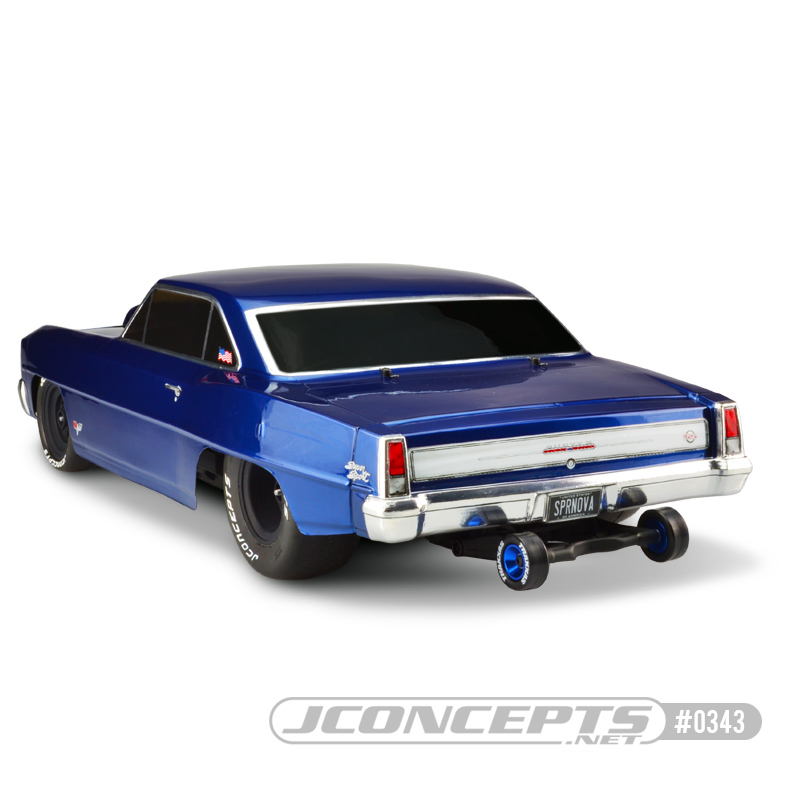