From JConcepts:
The 60’s generation stands as a testament to the qualities that once made the American automobile industry the envy of the world. The 1966 Chevy C10 is a plain-Jane work truck, old enough to be vintage, however, not so antique that it’s a relic. The 1966 Chevy C10 incorporates all the elements that made vehicles beautiful during this era of engineering and design. When JConcepts was looking for a drag-racing truck to add to the line-up, the Chevy C10 stood out. From start to finish, the 1966 is an honest truck that is comfortable with its essential truckness.

This truck is utilitarian as is, but once you add the step-side bed, “ultra” rear wing placement and build-up, it manages to be both atheistically graceful and mechanically formidable. It has character and style, lower stance was emphasized by an attractive, pinched-waist body featuring “jet pod” eyebrows over the grille. Sizeable front chin-spoiler, large front hood-scoop, high-operation 60’s style cab with rear flange for authentic looks.

The rear of the truck has a step-side style bed and the entire design is multi-faceted. The rear fenders have built-in clearance for a large assortment of drag racing rear tires including the JConcepts #3194 (Hotties) rear SCT tire. The body shell also has the identifiable flat rear tailgate area and built-in connection points for the oversized rear wing option. The truck can be used with or without the rear roll-bar option and “ultra” rear wing setup. Many pieces make up the Chevy C10 and can be tailored to the customer needs or focal point of the build.

As with all JConcepts bodies, the package includes a custom decal sheet, window mask, body shell and accessories. Officially licensed to JConcepts by Chevrolet, the classic is also built, formed and designed in the U.S.A. with professional grade artisans. As always, each body set is backed with JConcepts customer support and racing heritage.

All additional pieces need to be carefully trimmed with quality curved scissors and smoothly sanded before painting. Plan attachment points and paint all materials before assembly. Add included window mask to the inside of the shell and spray only polycarbonate approved paint to the inside of the body in light coats. Three to four light coats of paint should be used to cover the body, roll-bar and wing assembly and let to dry according to paint can instructions.

The 1966 Chevy C10 measures a 13″ wheelbase and the inside dimensions of the body are 11.75″ front and 12.00″ rear width. The body is built for a 2wd SCT wheelbase length and fits standard SCT width chassis layouts and suspension using drag racing (#3193 front tire, #3194 rear tire & #3387 wheels). It’s helpful to plan your build, take measurements and modify your platform to fit inside the boundaries of the Chevy body. 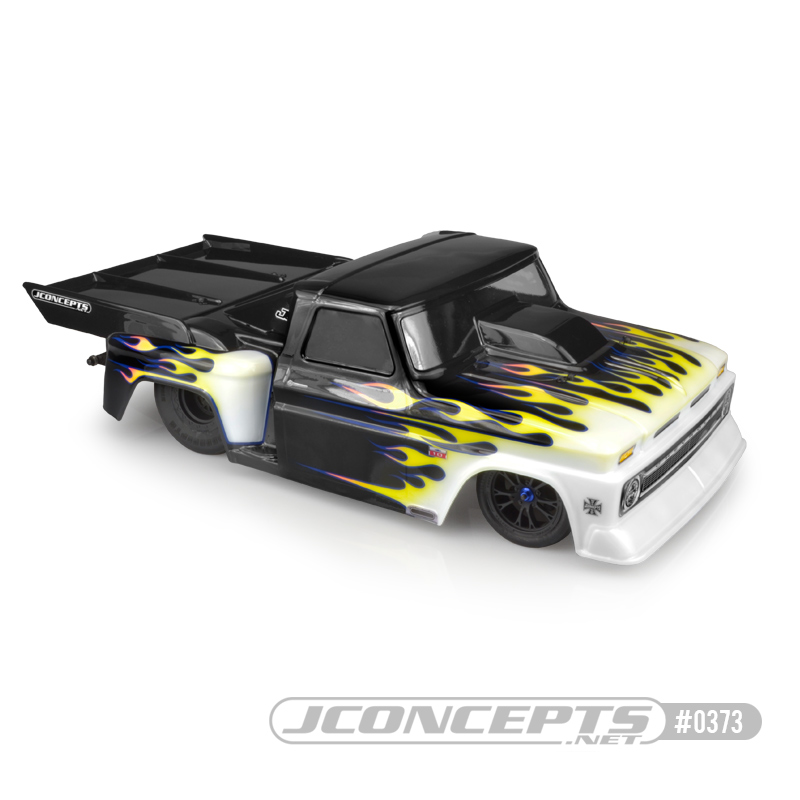 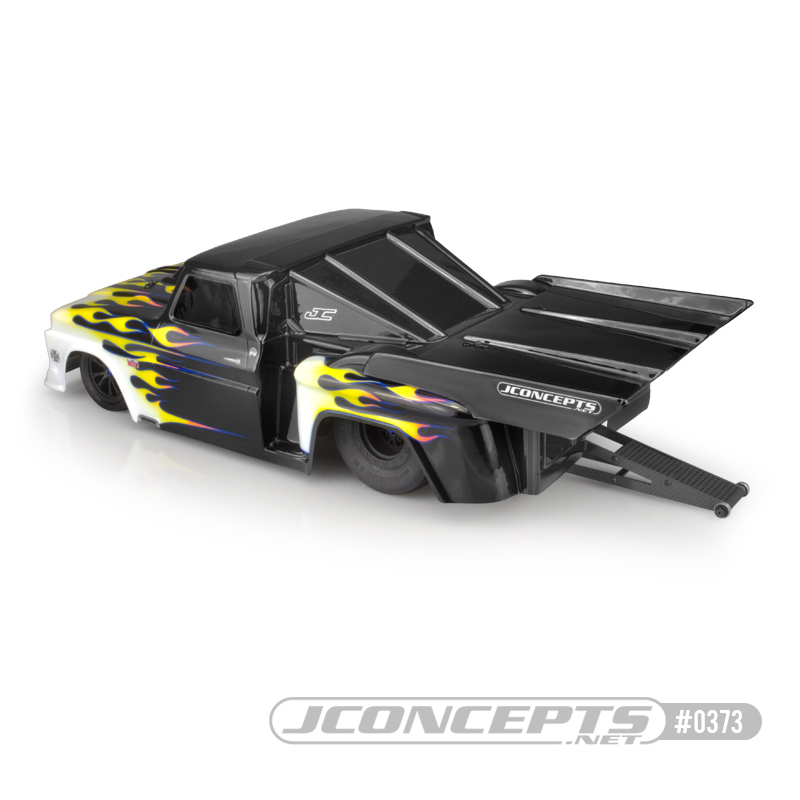 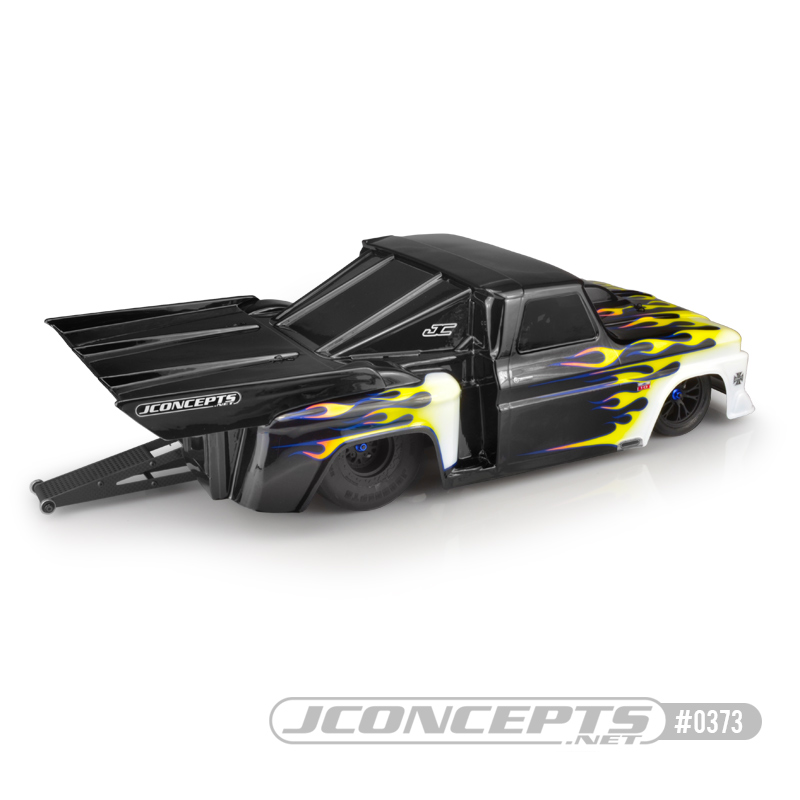 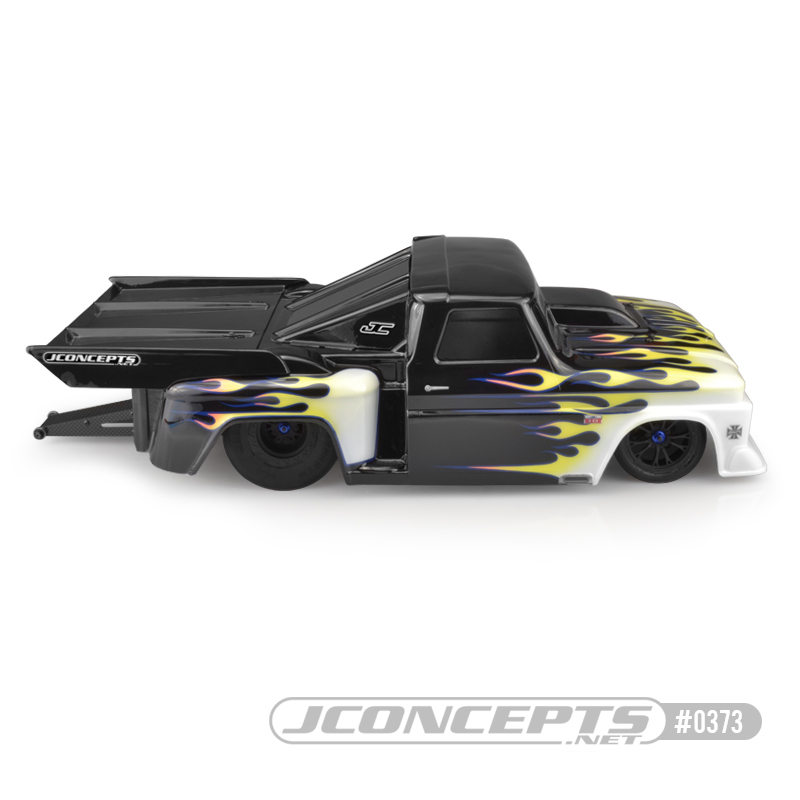