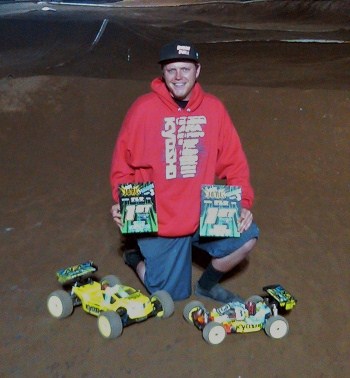 Southern California’s hotly contested JBRL series invaded Milestone RC Park in Riverside California yesterday. The race attracted some of the biggest names in RC, including Adam Drake, recently crowned ROAR National Champion Ryan Cavalieri, current iFMAR World Champion Cody King, Travis Amezcua, Brent Thielke, Chad Bradley, and a host of other Southern California fast guys. The race at Milestone always draws a big turnout because the facility is inside the Motocross park, and many of the drivers like to bring out their bikes and ride as well.

Round 2 of buggy qualifying was interesting, as Cody King was on a TQ run, several seconds ahead of Drakes previous TQ mark from round 1. With just two laps to go, King made a few mistakes dropping him off the TQ pace. In a last ditch effort and with nothing to lose, King proceeded to lay down the fastest lap of the round and just barely squeeze under Drakes previous TQ. This would give Cody the elusive TQ point for Buggy in round 3. The second round of Truggy qualifying was a reversal of Buggy, with Drake trying to beat King’s previous TQ time, but fell short by several seconds.

The main events would not disappoint, as King and Drake would swap the lead several times, Drake taking one less pit stop. Cody’s pit crew would bring him in quickly after the first stop, to get both drivers on the same pit schedule, a strategy that appeared to work as Cody gained the upper hand. Once Cody was in front and full of fuel, he slowly stretched out a comfortable lead and cruised home to the victory. The buggy and truggy finals were nearly a carbon copy of each other and played out much the same way, with King taking his second stop early, and a battle unfolding from there. ROAR champion Cavalieri was several positions back in the buggy main and dropped out with unknown mechanical issues.

World Champ Cody King siezed the day as he TQd and won both Buggy and Truggy, taking advantage of the opportunity to get the #1 buggy plate back from Travis Amezcua, who captured the points lead at round 2 last month.

The drivers liked the large track at Milstone so much, there is an effort under way to lobby Nitro Challenge and get the famed event into this venue. We’ll see what Joey Christensen has to say about that, maybe in the coming month or so.