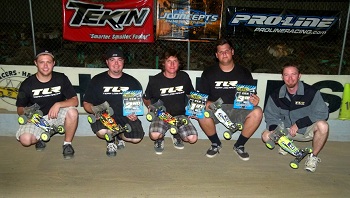 TLR and Losi’s Frank Root, Matt Castellano, Matt Schreffler, Kevin Gahan, Cody Turner, Ryan Dunford, Aaron Lane, Casper Nielsen, and Jerry Blodgett all made the trip up to Racer’s Haven in Bakersfield, CA for the 4th Round of the 2011 Jimmy Babcock Racing League. The track layout was fast and fun with good grip setting up for an awesome weekend of racing. TLR and Losi took home several TQs, and A-Main wins.

Matt Schreffler was on a mission in qualifying. Matt used his 22 buggy to set the fastest time in round 1 and take the overall TQ, leading A-Main 6 qualifiers with TLR 22’s! When the tone went off for the main, Schreffler would have a slight bobble give the lead to Matt Castellano. Frank moved his was up to 3rd and had a good battle with Schreffler, and would eventually take 2nd, but the race belonged to Matt Castellano who took the win! The TLR 22 swept the Top 5 finishing positions, Castellano, Root, Schreffler, Lane, and Dunford!!

Aaron Lane would rocket to the solid TQ, with Doug Nielsen in 2nd and Ryan Dunford in 3rd. Throughout the race, the 3 Ten-SCTEs would have a very close battle. Ryan had a few bobbles and dropped back, but made a hard charge to pass Casper for 2nd, and even got close to Lane for the lead. Lane would respond with quick laps to take the win! Dunford finished 2nd, and Nielsen 3rd and the Losi Ten-SCTE swept the podium again!

Cody Turner started 2nd and Frank started 8th for the 6-minute A-Main. Frank quickly moved through the field passing several cars on the first few laps to move into 3rd behind Turner. Frank was able to get past Cody for 2nd, then chase down the leader. After a few minutes of close racing, Frank stuck a pass at the end of the straight to take to lead for good and would claim the A-Main victory! This is Frank’s 2nd win in 4 Rounds, and he is now Co-Points leader.

Kevin Gahan would take to TQ spot with the only 19 lap run in qualifying with his TLR 22. His teammate Casper would round out the top five. Kevin with his front row start for the 6 min A-main would lead from start to finish with his TLR 22. The Red BK-bar rear tires and silver taper-pin fronts were hooked up all weekend.

Matt Schreffler was on a mission in the A-Main. Matt started 3rd, but quickly showed he would not be denied. Any amazing inside pass along the back straight put Schreffler into 2nd, and a bobble by the leader put him out front. Matt would then power away from the field and take a comfortable lead with his XXX-4G+!

Privateer driver Lyle Spangler took the win in Exp. Stock truck with his XXX-CRT. Lyle put in a great race with leading most of the race to take the overall win.