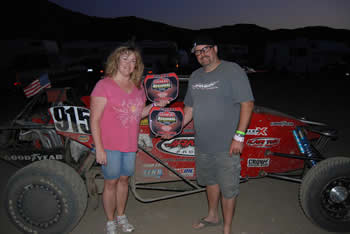 The Lucas Oil Off-Road Regional Series race at Glen Helen Raceway in San Bernardino, Ca. will be an event for the Halsey Family to remember. Jammin Jay went 3 -1 in the Pro Buggy Motos to capture the overall win. Jay’s wife, Shelby, then went on to win the “Powder Puff” event in her first event. Her first time ever in the buggy was during the Friday practice session. Within 3 laps of the second practice session, Shelby was clearing the Double Double section of which only 3 of the girls in the race were able to do. With a holeshot under her belt, she promptly spun it out in the muddy turn two allowing five buggies to pass. Keeping cool throughout the twelve minute main event, Shelby picked off the competition one by one and then taking the win by a comfortable margin. By the end of the main event she looked like a seasoned driver pitching the car and sliding it through the turns.

Jammin Jay had a much tougher time of it. A back row start in moto one meant he had to pass his way into third. The moto two start proved much better as he came out of the first turn in second and hounded the leader for the first half of the race as he held off third. Jay put the pass on for first place and pulled away to the checkers after the fifteen minute mark. Jay celebrated with some front straight donuts for his first win