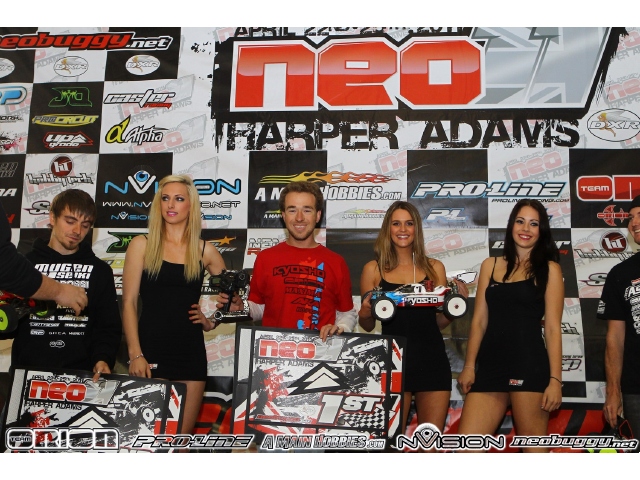 Tebo has been on fire recently in 1/8 Nitro with a double TQ and win in Truggy and Buggy at the 2011 Nitro Challenge, TQ and 3rd place finish at the 1/8 IFMAR Worlds in Thailand, and he is also the defending 2010 ROAR 1/8 National Champion in both Truggy (TQ) and Buggy.

The 2011 NeoBuggy Race was once again held at Harper Adams in the UK during the week of April 22nd – 25th. The NeoBuggy Race is known as the biggest race of the year in Europe along with the 1/8 Euros later in the year. Kyosho had one of the largest teams at the event consisting of 2-Time Winner Jared Tebo, Current 1/8 World Champion Cody King, Jerome Aigion, Shin Adachi, and young talent David Ronnefalk.

After the 3rd round of qualifying was ran, the prestigious NeoBuggy 2011 Juniors A-Main Event was ran. This is always a big event for the up and coming kids of R/C. This years winner was Kyosho/Team Orion/AKA’s David Ronnefalk who would go onto take the win over some very tough competition with his Kyosho MP9 TKI2 WC. In 2nd place was World’s Finalist Kyle McBride for Durango with Micke Johansson rounding out the podium with his Kyosho MP9 TKI2 WC!

All through qualifying it was actually AKA’s Ryan Lutz running his new Durango DNX408 that was setting the pace and turning the fastest times, but it was all down to Q6 to see who would take the top qualifying spot. After qualifying was complete, it was Kyosho/Team Orion/AKA’s Jared Tebo that would TQ the event with his Kyosho MP9 TKI WC with AKA’s Ryan Lutz qualifying 2nd. This would put Jared into the odd Semi where he would start first. Tebo would then go onto win the Semi Final in convincing fashion to guarantee him the first starting position for the 45-minute A-Main Event. Also making the A-Main for Kyosho was Cody King, Jerome Aigoin, and Shin Adachi making it 4 Kyosho buggies in the A-Main! Kyosho would have the most cars in the A-Main by any manufacturer!

As the tone went off to start the 45-minute A-Main, Tebo started out with a fast and consistant pace to pull away from the field each lap. After the first round of pit stops, it was still Tebo out front and stretching out his lead. Now approaching the halfway point of the A-Main, Tebo had built up a 17 second lead on 2nd place. As the race ended, it was Tebo crossing the finish line first being the only driver to made it by for the 76th lap! This would also be Tebo’s 3rd time attending the NeoBuggy Race and for the 3rd time he has left as the Champion!

AKA is also very proud that nine of the 15 drivers in the main event choose AKA tires to go for the win. Three times as many as the next closest tire company and overall the most preferred brand in the final. 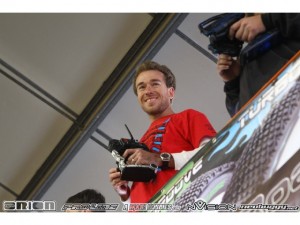 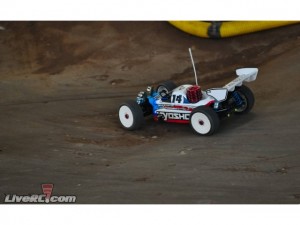