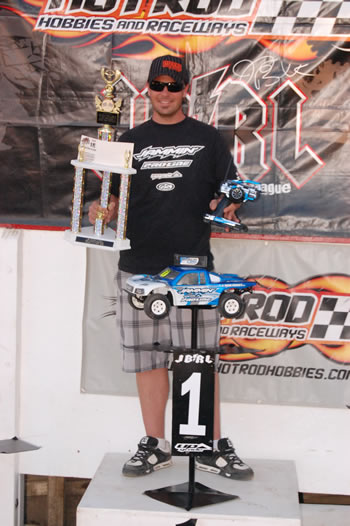 The seven month long JBRL Electric series finally came to an end last weekend at Hot Rod Hobbies. The series extended from tracks all around Southern California from indoor to outdoor, loamy to hard pack and even a tar surface kept all racers on their toes during the 2010 JBRL Series. This years JBRL averaged around 220 entries at each event. The Unlimited 4wd Short Course class was one of the most popular among racers and the Jammin SCRT-10 was the clear choice by the majority of the racers in the class, taking 5 wins out of 8 events. The series ended with Chad Bradley driving the Jammin SCRT-10 on top of the overall points and one win from a perfect score, Kevin Smith also driving a Jammin SCRT-10 finished 2nd overall in the series, and DJ Sandate rounded out the top 3!