12 years and five more F&F films have come and gone since 2006’s Fast & Furious: Tokyo Drift, but for many it remains the most unique film in the franchise. Its the only one that isn’t built around the franchise core characters (although Vin Diesel does make a brief cameo at the end). The biggest difference is that it hinges not on street racing as do the others, but on the sport of drifting. Drifting does also appear in race/chase sequences in the other films as well — notably the second installment (2 Fast 2 Furious). So Jada looked to these two films for inspiration for its newest and most sophisticated RC cars yet.

Easily the most memorable car from Tokyo Drift belongs to Han — a sunset orange pearl machine whose origins as a 1997 Mazda RX7 are almost unrecognizable thanks to a stunning VeilSide widebody kit! In 2 Fast franchise hero Brian O’Conner (Paul Walker) wheels a wicked Nissan Skyline R34 GT-R sideways through the streets of Miami. 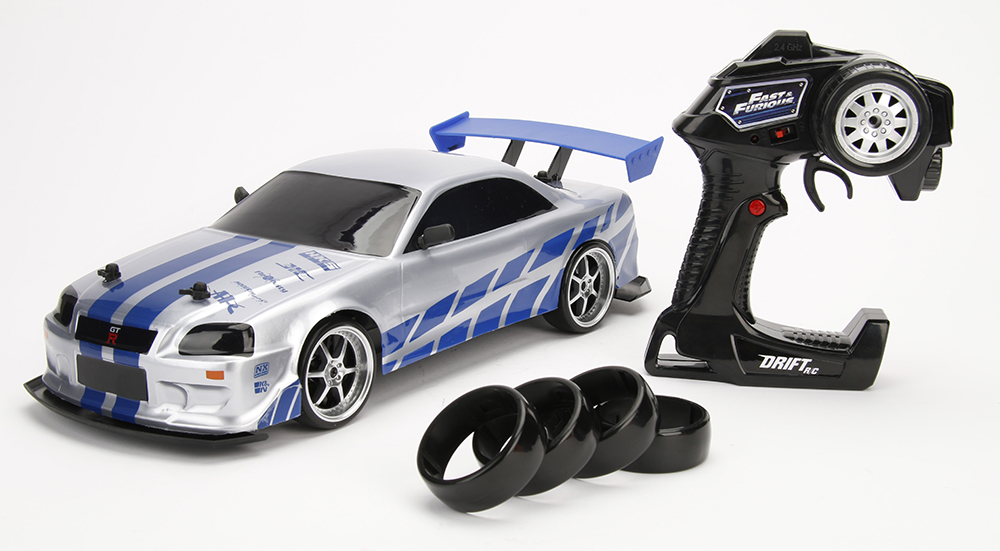 With its RC versions of Han’s RX7 and Brian’s Skyline, Jada has engineered the power systems, chassis, and tires for sideways sliding action. They’re still more toward the toy end of the RC spectrum, but they have several interesting new features. Like any true drift car these are rear-wheel drive, and each car comes with two sets of tires. Their construction balances just enough grip while being hard enough to promote big slip angles. Each car gets a special pistol grip 2.4GHz radio with what Jada calls a “Turbo” button, which triggers a temporary extra voltage boost (courtesy of an all-new battery system) to the motor to kick the car out sideways to initiate a drift.

The cars are still undergoing final engineering tweaks but Jada sent us sneak peeks of both cars. Production versions will be on sale in late June/early July, and they look like a lot of fun.

FAST TRIVIA
– VeilSide actually built the RX7 not for the movie but for the 2005 SEMA show. The Producers of Tokyo Drift saw it there and liked it so much that they bought it from VeilSide, repainted it orange (it was originally red), and stuck it in the movie pretty much as-is.

– The steamroller-wide tires and lack of low-end torque from the little Mazda rotary engine made the RX7 hard to kick sideways, so the crew used several tricks to reduce rear grip and help it drift.

– The Skyline had no such torque issues, but the stock R34 GT-R came with both all-wheel drive and 4-wheel steering which are specifically meant to keep it from sliding around. The crew took out the front drive shaft and disabled the steering on the rear wheels so it could produce the needed powerslides.

– Tokyo Drift is the only Fast & Furious film to take place out of sequence chronologically. That’s how Han (who is killed in a crash at the end of the film) magically comes back for three more sequels.

– Tej (played by rapper Ludacris) and Roman (Tyrese Gibson) make their first appearances in 2 Fast, but returned three films later in Fast5 and become series regulars from then on.