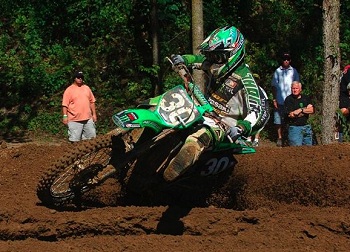 Monster Energy/Pro Circuit/Kawasaki and Traxxas are excited to welcome a familiar face back to the team. Ivan “Hot Sauce” Tedesco, who earned an AMA 250 Pro Motocross Championship for Mitch Payton’s iconic team in 2005, will jump back on a KX250F this summer to battle a new breed of young guns. Tedesco brings with him the experience and credentials of back-to-back Supercross Lites West Championships in 2004 and 2005, a 2005 AMA 250 Pro Motocross Championship, and a 2005 Motocross des Nations victory with Team USA – all aboard a Mitch Payton machine. He is excited about reuniting with the legendary organization, and is planning on making an impact upon his arrival.

“I’m really pumped to join the team again seven years later,” said Tedesco. “I’m hoping to have a lot of fun this summer and get some good results. Ultimately, the goal is to be a factor in the title hunt by the end of the series. Working with Mitch and Bones again on the 250 is going to be really cool. I feel right at home here.”

Hot Sauce in his 2005 Championship seasonHot Sauce in his 2005 Championship seasonTedesco joins new teammates Dean Wilson, Blake Baggett, and Broc Tickle as they embark on the 2012 Lucas Oil Pro Motocross Championship, which will host its opening round May 19 at the Hangtown Motocross Classic in Sacramento, Calif. Wilson will be defending his 2011 250 Championship Title, while Baggett and the rest of the class chomp at the bit for a chance to contest his campaign. After getting his feet wet on the big bike during the 2012 Monster Energy Supercross season, Tickle will represent the team in the 450 class. Monster Energy/Pro Circuit/Kawasaki team member Darryn Durham will soon undergo surgery due to a shoulder injury sustained while testing for the upcoming outdoor season. He will be recuperating for the next several weeks, at which time his injury will be re-evaluated. The team will make another announcement about his recovery at that time.