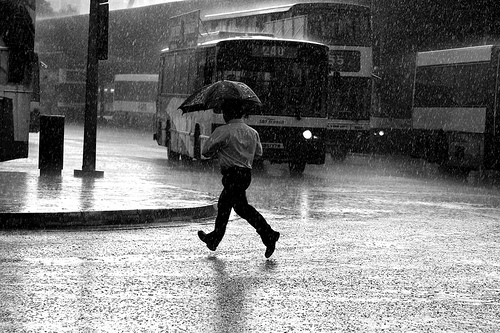 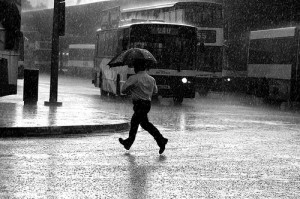 It can't always be sunny in So Cal.

It rarely rains in Southern California.  This area is known for its blue, sunny skies nearly year ’round.  We get to play with our RC cars whenever we feel like it.  And sometimes, like today, I actually need to run an RC car for testing…but it’s raining.

So, what do I do when it’s raining?  First I tend to ask myself, “When is the last time it rained?!” and never seem to remember.  Next, I accept that I can’t go outside today and then figure out ways to pass the time.  Yes, in sunny states we tend to get a bit stir crazy when it’s gray, cloudy and rainy outside.  After looking around my work room/home office, I realized that it was time for a good Spring Cleaning.  With a capital S and C.  This ain’t no general dusting.  I tore my room apart, and re-set everything the way it should be.

My rainy-day routine involved clearing off my desk, a monumental task in itself.  Just sorting through some items, I found myself asking lots of questions.  Why are there 37 screws in an old applesauce container, with a Post-It Note that reads “Reinstall!”  Reinstall into what exactly?  Which battery packs out of the 5 sitting on my desk are actually charged?  Why is there a note that says “URGENT: Call Associated tomorrow”?  Was tomorrow yesterday, or 2 months ago?  Ugh.  My office trashcan magically filled itself to the brim by the time I was finished.

Then I concentrated on my inventory of test products and old parts in the corner.  A new, shiny LiPo charger resting cheerfully upon a haggard, beat-up buggy body that’s 6 months past its prime reminds me that sometimes, the trashcan is my best friend.  But I get sentimental.  That buggy body traveled thousands of laps at my local track, and I beat (and was beaten by) countless racers with that thing.  So what if the entire front nose section snapped off the last time I used it?  It’s special.  It represents months of club racing.  Countless hours wrenching, toiling tirelessly the night before a race, and eeking out a hard fought victory.  Indeed, it’s emblematic of man’s struggle against…oh who am I kidding, it’s in the trash now.

And you…clear plastic bin of broken parts hiding in the corner…you serve no purpose whatsoever.   I remove fractured, broken and splintered parts from my vehicles like they’re medals of honor.  I’ll toss them in the trash, but more often I’ll put them into the parts bin.  I justify the parts bin by imagining myself needing a bent hinge pin, broken suspension arm, or cracked fuel tank for photos in a How-To article some day.  But really, when’s the last time I wrote a “How To Diagnose A Cracked Suspension Arm” article?  Never.  You know why?  Because the article would be shorter than a haiku, only two sentences long.  “Is it cracked?  Replace it.”   Maybe a haiku would be appropriate:

Pointless, in the bin.

My plastic dead parts bin is empty now.  As you can see, rainy days tend to drive me crazy.  I still like ’em though, because my work room is always cleaner after a rainy day.  Japanese poetry or not, a clean work room is something that just makes me feel better.