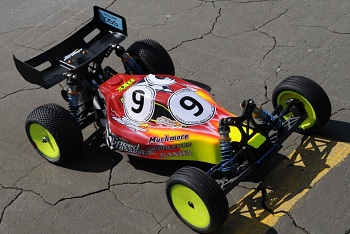 Team Durango would like to congratulate Jörn Neumann for placing his prototype Team Durango DEX210 into the A-main of the 2011 2WD World Championships.

Starting from ninth on the grid against the World’s best 1/10 scale racers, Jörn drove well to finish the first leg in sixth place. In the second leg Jörn finished third after an amazingly focussed drive. In the third and final race he finished fifth. With the best two results from three to count towards the final classification, Jörn finished the 2WD World Championships in an impressive fifth position. Well done Jörn, a good result for the prototype DEX210.

Jörn’s DEX210 was one of a few hand-made prototypes at the World Championships (all of which have been built by Mr Durango, Gerd Strenge). While the production DEX210 will use materials typically seen on 2WD buggies (such as composite shock towers), the design is anything but normal.

At Team Durango we pride ourselves on making super-fast, innovative racing machines and the DEX210 is no exception. Based on the final testing at the World Championships, we can now conclude a Patent application for the revolutionary DEX210 (more news to follow soon). This will allow us to complete final sample testing and move into production within the next few weeks. The various DEX210 prototypes that have evolved over the past 18 months have proven our design ideas, and we can now bring those ideas to life in what will be one of the fastest 2WD off-road buggies available.

Team Durango would like to congratulate Ryan Cavalieri on becoming the IFMAR 2WD World Champion for 2011. We wish all racers at the 2011 World Championships successful racing for the 4WD event.