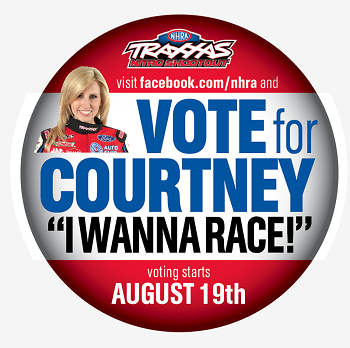 Courtney Force has had a tremendous start to her rookie season including three final round appearances and her first win in Seattle. She is asking her fans to give her a little help so she can make it an even more awesome first year behind the wheel of her Traxxas Ford Mustang Funny Car. She has launched the “I WANNA RACE!” campaign to get fans to vote for her so she can win the last spot in the Traxxas Shootout.

Beginning after the completion of the Lucas Oil NHRA Nationals in Brainerd, Minn., on August 19th fans can go to the NHRA’s Facebook page and vote to put Courtney into the inaugural Traxxas Shootout during the Mac Tools US Nationals. This race within a race will have a purse of $260,000 with the winner getting $100,000. The final spot will be awarded through a fan vote and then a lottery drawing on Wednesday, August 29th.

“I wanna race! I am having a great rookie season with my Traxxas Ford Mustang and I want a shot at the $100,000 Traxxas Shootout money. My Traxxas crew guys have given me a great race car and I think I can win this big money race but I need some help from my fans,” said Force. “I want to go after the big bucks because we have had such a consistent race car this season and I think our team deserves a shot at it for working so hard. Please go to the NHRA’s Facebook page and vote for me. Also spread the word on Facebook and Twitter so I can get the most votes and have the best chance in the lottery on Wednesday before the Mac Tools US Nationals.”

Fans can vote for Courtney through noon ET today. Courtney is asking all her fans to vote and help spread the word to help give her the best chance to grab the last spot in the Traxxas Shootout.

Courtney’s sister and two-time Mac Tools US Nationals Funny Car champion, Ashley Force Hood produced a viral video to get fans excited about voting for Courtney. The video can be found on YouTube.com at http://youtu.be/YLvT9FL6qbw. The video was quietly posted last Thursday and without any promotion almost 700 people have viewed and shared the video.

Courtney has raced every driver that has clinched a spot in the Traxxas Shootout and has a beaten over half of them at least once this season. She has as good a chance on race day as anyone so cast your vote for Courtney now. Fans can vote here www.facebook.com/nhra when voting begins on August 19th.

If you like this article, check out this additional article on Courtney Force.