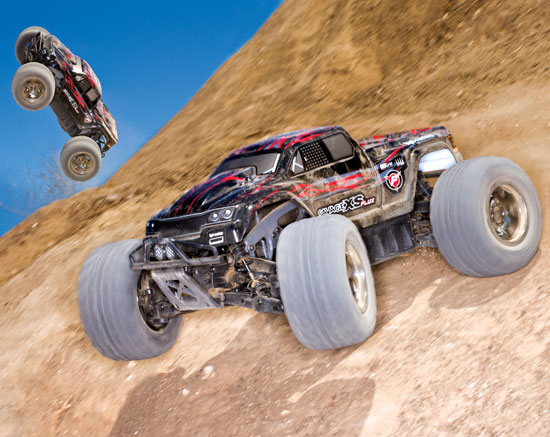 There’s no denying that the HPI Savage has been a major contender in the RC monster truck market for quite a few years now. Yet, throughout its life span, the Savage has stayed fairly true to size with the exception of getting slightly larger. Back in 2009, HPI released the Savage Flux which produced nearly 6 horsepower! Standing backflips—no problem! I don’t care who you are, but that’s a tremendous amount of power that is sure to put a smile on anyone’s face. Like most typical monster trucks, however, when it comes to powerplants, there is a desired element of overkill. The new Savage XS may be small, but this mini monster screams “excess,” thanks to its 1/10-scale sized electronics. The big question is—“Can this version of the enormously popular Savage Flux live up to the reputation of the “Savage” name?”

Being that the Savage XS is not a track-specific vehicle, it warrants itself to whatever tarmac is available for abuse. Whether it’s grass, dirt, sand, asphalt, it doesn’t discriminate. With that said, I took it to an open park out near my house in SoCal and let this little brute loose upon the park. The park features baseball diamonds, large open grass fields, and a decent-sized parking lot that’s got enough room for the Savage XS to stretch it’s legs out. Originally, I felt that the 2S configuration would be an ample amount of power and give me that extra bit of run time to exploit all the mayhem this pint-sized monster truck could get into. But instead, HPI supplied a 3S LiPo pack and guaranteed me that I’d be far happier with this configuration. Boy, were they right! This little truck is the true definition of a monster. What really grabs your attention is just the sheer barbaric power that it lays down when you squeeze that throttle trigger. The biggest problem is, it’s so tempting to just grab a handful of throttle and watch this monster truck come to life that the run time suffers. The flip side to that is… who cares! It’s like driving an old ’70’s Cuda with a thirsty big-block 426 Hemi under the hood that’s only happy with your foot nailed to the floor as your race from light to light. Frankly, a 2S pack has no business in this truck because it completely defeats the purpose of what its all about, tearing the tarmac a new one. Granted, it’s still fast, just not “11” fast. Maybe I’m going on and on about this too much, but it’s just so much fun to watch this truck accelerate the way that it does. Oh, and did I mention, it does standing backflips too! But just like any high-horsepower vehicle, if you want to get around you really have to be sensitive with how hard you squeeze the throttle. If you’re careless, the truck constantly wants to cartwheel of flip onto its lip. Moderation is key to success with this truck. During high-speed runs it can be quite a handful thanks to it’s short wheelbase and when it’s up to full speed the tires do grow in size quite a bit which makes the truck lazy, tipsy, and sensitive all at the same time. The one thing that I can caution is, when your doing high-speed passes make sure to plot out your destination because the truck is far to fast and sensitive for you to make quick last minute direction changes without the truck completely losing control and cartwheeling into or off of who knows what. Throughout this testing, I was impressed with how durable the truck actually is. I can honestly tell you there were a number of times that I cartwheeled and crashed this truck so hard into a number of obstacles, that each time I was sure that something had broken. I’m here to tell you that the truck let me down every time. The one thing that I would certainly keep a few spares around, replacement bodies, especially when you’re first getting use to the power. You’re going to spend a lot of time on and sliding on the lid. I think the furthest I slide on one pass was over 50 feet. That’s when I learned the truck could still pull a wheelies while going from half to full throttle.

As a racer, I haven’t taken minis too seriously. The Savage XS has gotten me to completely rethink my take on minis. Its tenacious power and 1/10-sized waterproof electronics makes it a benchmark as to what mini-sized RC cars should be. It’s built to satisfy an experienced RC enthusiast that wants pure unadulterated insanity with the sole intention of tearing the tarmac a new one. To be perfectly honest, it’s a handful to drive and if you’re not experienced, there’s going to be a steep learning curve, especially when using 3S packs. That said, I wouldn’t want it any other way. My one complaint about this truck, the price tag. I know it packs a ton features, but by the time you add a 2S or 3S pack and charger, you can easily exceed $400. Other than that, you really couldn’t ask for anything else from a mini-sized monster truck.

see the entire article in the January 2012 issue of RC Car Action.