RCCarAction.com
Building Tips, Getting Started, How To 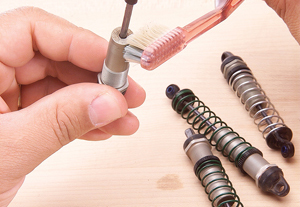 Few components work as hard on an off-road vehicle as the shocks. Whether they’re countering cornering loads, softening bump forces, or soaking up jump landings, the shocks are always pumping away. That’s why it’s important to keep them in tip-top shape with fresh seals and fluid. Rebuilding them is easy and will give your car that just-built feeling on the track.

Step 1: Remove & inspect the shocks
Wipe the shocks down so you can give them a good eyeballing. The shortlist of things to look for includes weeping around the seals, bent or scored shafts, dings in the shock body and cracked rod ends. Any of these problems are cause for replacement of the damaged parts. 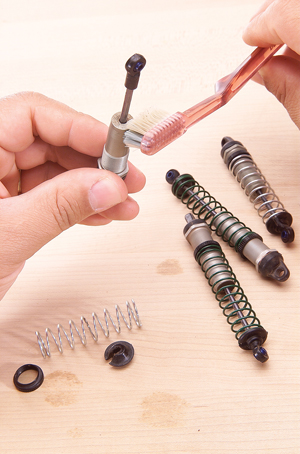 A toothbrush is the perfect tool for cleaning shocks.

Step 2: Disassemble & clean the parts
Drain the shock fluid and completely disassemble the shock, including the piston and shaft. If you have Losi shocks, pop open the seal cartridge and remove the O-rings. Roll the shaft on a perfectly flat surface; if it’s bent, you’ll feel it wobble (and you should toss it). Toss the O-rings regardless of the condition they’re in; new rings are cheap leak insurance. Spray everything down with denatured alcohol, and you’re ready to rebuild.

Roll the shock shaft to check its trueness. 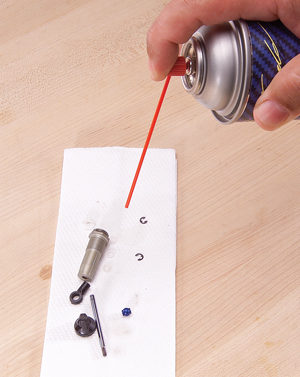 Use motor spray or denatured alcohol to clean all the parts before reassembling the shocks.

Step 3: Install the pistons
For best performance, the piston should not have any play between the E-clips. If there is play, you can shim the piston or slightly bend one of the E-clips to take up the slack. 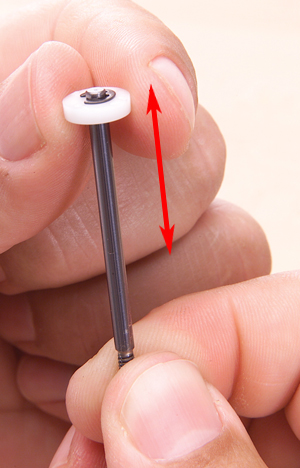 The piston should not float between the E-clips.

Step 4: Install the seals
At the very least, coat the seals with shock fluid before you pop them into the cartridge (if you have Losi shocks) or load them into the shock body. For best performance, Associated’s Factory Team Green Slime seal lube is the hot setup. Smear the green stuff over the seals, and the shocks will have less stiction and form a better seal against the shafts. If the shock uses an O-ring seal under the cap, install it now. 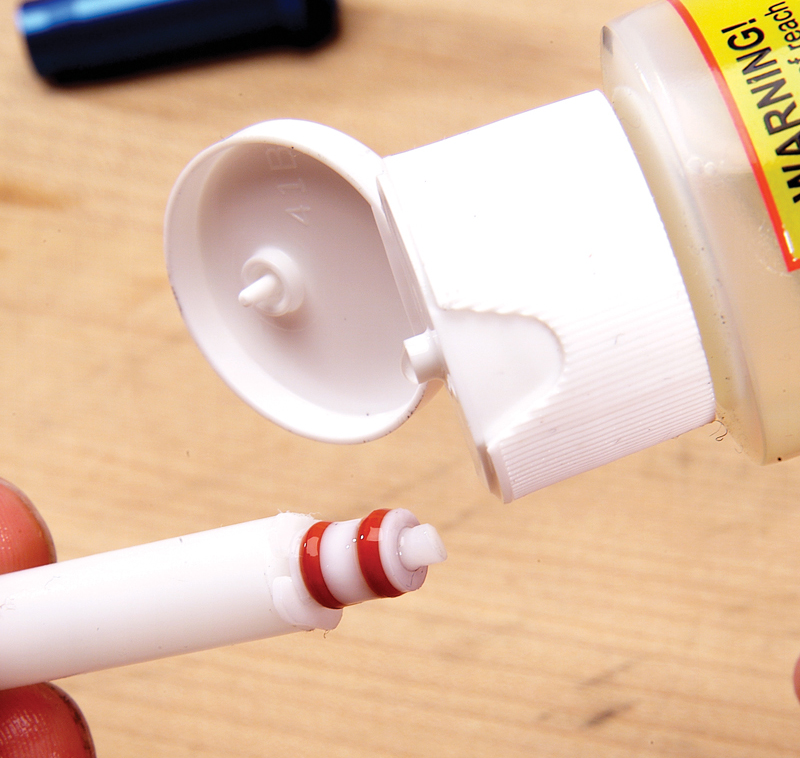 Lube the seals before you install them.

Step 5: Install the piston/shaft assembly & fill the shock
Make sure you remember to reinstall any internal spacers, and lubricate the tip of the shaft before passing it through the seals. Now you’re ready to fill the shock. To fill top-filled shocks (nearly all non-Losi shocks), pull the shaft to full extension and then pour in the fluid until the shock is half-full. Release any trapped air bubbles by slowly twisting and raising the shock shaft. When all the bubbles have escaped, you can fill the rest of the shock. For Losi shocks, fill the body until the fluid reaches the threads.

If your shocks have spacers on the shafts, don’t forget to reinstall them all. 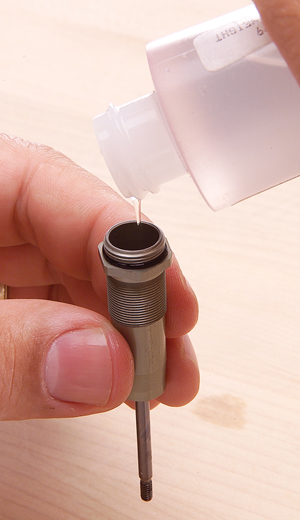 Step 6: Bleed the shocks
Fill your top-filled shock until the fluid forms a dome; then screw the cap on—but not completely. Leave it about “one turn” loose, and then compress the shock shaft to bleed out excess fluid (if fluid doesn’t flow out and the shaft is hard to compress, loosen the cap until fluid flows out). If you have Losi-style shocks, thread the cartridge/piston/shaft assembly into the shock body with the shaft fully extended, then bleed the shock as described for top-fill shocks.

Compress the shock to bleed out excess oil. Work over a rag so you don’t mess up your new Hagar slacks.

Step 7: Test the shocks
With the cap or cartridge fully tightened, compress the shaft. If you can’t compress it fully, or it’s very hard to compress at the end of its travel range, you need to bleed more fluid from the shock. Ideally, the shock shaft should compress easily and then extend itself about halfway when released.

The shaft should extend itself about halfway after compression.

Step 8: Reinstall the spring, preload collars, perch & rod end
That’s it, the job is done; now you can do it all again for the other three shocks! 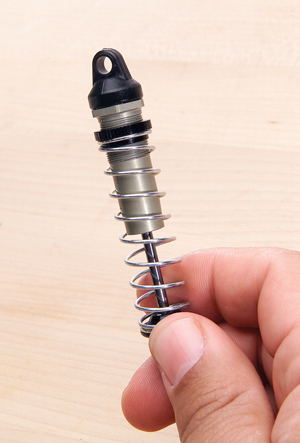