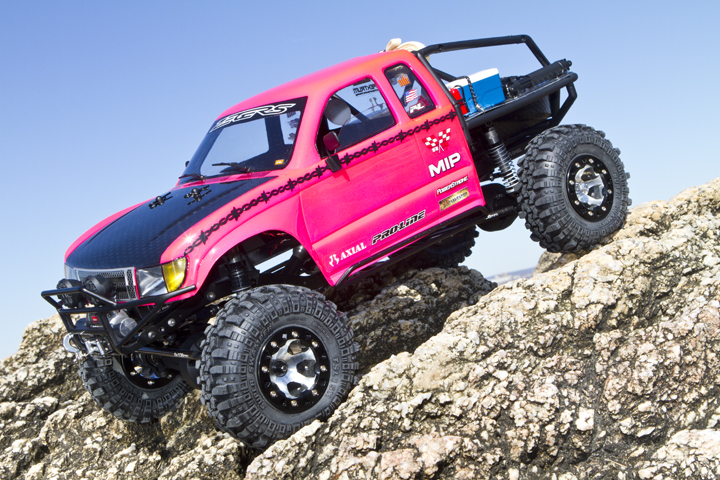 The task before you is to design an awesome rock crawling course. Seems simple, right? Well, I can assure you, based on my observations, this task isn’t so simple. I’ve been to tiny grassroots level local comps right on up to the Nationals. I’ve been to indoor comps and, of course, outdoor comps. I certainly won’t go as far as to say I’ve seen it all, but I have seen courses that have made me smile and I’ve seen courses that have made me scratch my head. And, I don’t mean scratch my head in a “Boy, that’s creative” way. I mean scratch my head in the “What the heck were they thinking?” kind of way. If you were wondering, the making people smile should be what you’re going for when designing courses. Here are some tips for making a great rock crawling course.

1. KISS. You’ve probable heard of Keep It Simple, Stupid. While creativity is important (more on that later), it is important to keep your courses simple. That doesn’t mean boring or easy. I’ll explain. If your course layout needs a map and a navigator, you blew it. How a driver is expected to progress from one gate to another should be readily apparent. Courses can be long or short with small or large distances between gates, but the “flow” from the start to the final gate should be clear. The competitors should need skill and strategy to succeed on your course, not GPS or a trail of bread crumbs.

2. Think Safety. This one surprises me, but I’ve seen a few courses that were just asking for trouble. At a rock crawling comp, with everyone walking around on rocks, there the possibility someone could get hurt, but don’t make it a sure thing by designing a course that forces drivers to be in precarious positions. Realize that a competitor will be far more focused on his vehicle than he will be on his footing. Don’t have a course go where it can’t safely be walked. If you’re not worried about people getting hurt, at least be worried about getting sued. Use good judgement. Use common sense. Competitors will have a transmitter in their hands; do not put a course in an area where someone couldn’t walk with a transmitter in their hands. The trucks can make crazy climbs, but the drivers shouldn’t have to.

3. Progressively Harder. My philosophy is that courses should, as much as possible, get harder with each gate. At the very least, the first gate shouldn’t be impossible. It sounds crazy, but I’ve seen course designers have three or four gates that were of no challenge in the middle of a course when the first gate was ridiculous. An awesome course will gradually weed out the weak. This is good for experienced drivers and newcomers. When a course designer purposely tries to ensure each gate provides increased challenges, a course is created that everyone won’t finish–or at least few will. The same course is also good for beginners because with an easier first gate, a moderate second gate and so on, they will make progress. They might not finish, but they’ll get on course and build skill. They’ll also experience less frustration.

4. Mix It Up. When I first started rock crawling it was all about vertical climbs. Every obstacle was a steep uphill rock hill to ascend or a ledge to climb and pop over. I think we were just amazed we had vehicles that could do this. Once we started adding digs, it was vertical climbs and tight turns. Eventually, course designers started creating courses that challenged a wider spectrum of a vehicle’s ability such as maneuverability, side hilling, down hills, etc. If you want a course that challenges every driver and every vehicle, keep variety in mind and mix it up.

5. Get Creative.Brian Parker, who frequently works with Axial, has pioneered the inclusion of the unusual at rock crawling comps. Wire bridges, full-size tires, you name, it’s fair game with many course designers such as Brian. These odd ball obstacles have two distinct benefits. First, they allow you to create additional challenges that the terrain doesn’t offer. Second, they keep your comps from getting stale. So, use some imagination and unleash some creative challenges for your competitors. Just don’t overdue it. Your non-natural additions should add to the course, not be a distraction.

1. Make sure you walk the terrain first to get a good idea of what you have to work with.

2. Use a partner to bounce ideas off of as you build a course.

3. Lay the course out and walk it before you mark any start and finish lines or gate marker positions with chalk.

4. Use out of bounds lines. This will keep the drivers on the course you want them to be on.

5. Take good mental notes of what worked well and what didn’t.