Spend a little time now to save a lot of time later.

The weather is starting to warm up across the U.S., and that means it’s almost time to head outdoors for nitro season! Get ready to spend some time doing some pre-run maintenance if you’ve been storing your rig all winter long; just like full-size cars, RC nitro-powered cars benefit from a tune-up every now and then. It’s the easiest way to keep your ride in tip-top condition, and it will lengthen its life as well. Here are some cheap and easy things that you can do in about 20 minutes to keep your car running smoothly. Ready? Go!

Look for leaks at the manifold, coupler and pressure fitting.

Before you do anything else, examine the exhaust system for leaks. A leak can rob your engine of power. A buildup of oil around a mating point in your exhaust is a sign that you have a leak. Replace the gasket or coupler in that spot.

Working on a dirty nitro-powered car is not fun. Clean it with Team Associated’s Nitro Clean.

You’ll be happy you did because you will be able to spot worn and broken parts more easily. It’s much better to find problems on the bench than on the track. 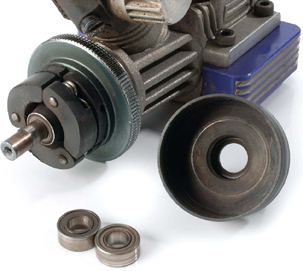 An air leak in your fuel line can cause your engine to run erratically. 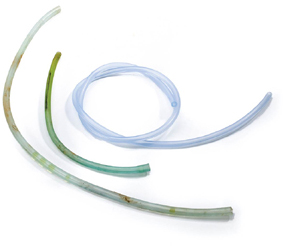 It’s always a good idea to replace your fuel line; you never know when you might have a small hole in it.

Replace all the old tubing with new stuff because air leaks can be hard to find, and they make engine tuning difficult. New tubing is cheap insurance.

Glow plugs don’t last forever, and if your glow plug isn’t up to par, your engine can’t run properly. After you’ve broken an engine in, it’s a good idea to toss the original plug. If you’re still using the plug you used during engine break-in, a replacement is overdue.

Changing the glow plug just takes a second. If your old plug seems good, put it in your pit box for emergency use.

When you replace the plug, chances are that you’ll need to re-tune the engine slightly for optimum performance. To maintain consistency, replace the plug with one of the same type or follow your engine’s instructions when choosing a new option.

Every nitro car’s brakes are exposed to the elements, and oil from the fuel gets all over. There’s a good chance that some of that oil will get on your brakes and lessen their grip. Take your brake system apart, and clean the disc and pads with motor spray. To de-glaze them, scuff them with 600-grit sandpaper before you reassemble them.

A quick deglazing and cleaning with 600-grit sandpaper will make your brakes work like new.

Make sure that the bearings in the drivetrain don’t bind. Just spin the axles to check them.

This is an easy one. Rotate the drivetrain with the brakes in the off position to make sure that everything rotates freely. If any parts bind or feel ìdraggy,î check all the bearings to see which ones are causing the trouble. Replace or clean the bearing in question, and then reassemble your car.

See, that was easy. It’s a good idea to do this type of maintenance after every half gallon of fuel. It will save you money, and you’ll have the winning edge when you line up against your buddies.