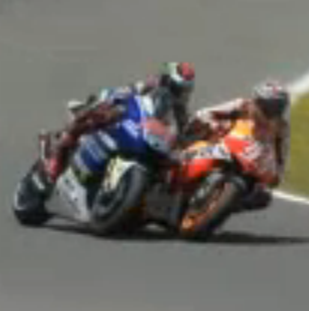 Earlier this month at the MotoGP Grand Prix of Spain, Repsol Honda veteran Dani Pedrosa rode off into the sunset for the win while the battle for second got ugly. A last lap duel between the reigning world champion Jorge Lorenzo (Yamaha Factory Racing) and Pedrosa’s rookie teammate Marc Marquez ended with the rising star overcooking the final corner and going shoulder to shoulder (and fairing to fairing) with the champ. The collision sent Lorenzo off the track, leaving him to finish third behind the teammates in what could be considered a questionable move at best.

This kind of thing happens in RC all the time; I’d bet that a strong percentage of club races across the country each week are decided by some sort of contact, and I can think of two IFMAR World Championships off the top of my head (Cavalieri’s Electric Off-Road 4WD victory over teammate Brian Kinwald in 2003, and Naoto Matsukura’s second 1/12-scale on-road title in 2009) that were decided in similar fashion. But how much contact is too much?

Clearly in the case of the video, in which actual humans are guiding 200+ mph road rockets with just Kevlar-enforced leathers protecting their skin from road rash, the potential danger of an aggressive pass is high. In radio control, however, you can blast someone clear off the track without harming anyone – and often without damaging either car. I’ve always felt that contact during a pass is acceptable as long as neither car is hit hard enough to change direction or spin out, a definition that obviously leaves room for interpretation. According to that rule Marquez’s dive bomb was clearly overzealous, but a similar pass attempt in motocross (or even NASCAR) is the norm.

What do you consider to be too rough? Where do you draw the line?