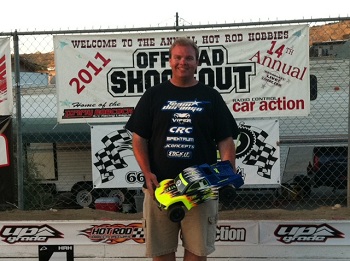 JConcepts was on hand during the 2011 Hot Rod Shootout in Saugus, CA. Dan Griffin was out supporting the JC team drivers and the product in hopes of finding that perfect setup at the popular annual event.

Qualifying was up and down for everyone as the winds blew making some rounds of qualifying more difficult than others. However, in the end, the JConcepts team held strong and qualified into many of the A-mains including 2wd and 4wd modified, modified SCT and SCT 4×4.

In the main events, Billy Fischer took command by winning A-1 and A-3 in 4×4 SCT to take home the winning honors. Adding another win to his healthy list of accomplishments, Billy’s Durango was dialed with JConcepts all weekend. Bar Codes in orange compound were gripping the surface and the winning tire on the hot temperature / abrasive surface.

Congratulations to Jimmy Babcock and the entire Hot Rod Hobbies crew on another successful event.