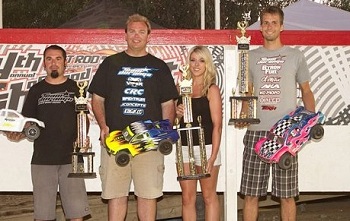 This past weekend saw the 14th annual Hot Rod Hobbies shootout in California, USA. The event comprised a wrath of electric off road classes and Team Durango drivers Billy Fischer, Ryan Lutz and Travis Amezcua turned up to give the competition a run for their money in 2WD & 4WD modified buggy, and Pro-4 Short Course.

Expert Pro-4 Short Course class there was no touching the dominance of the Team Durango DESC410R as it once again proved it was far-and-away the fastest and best handling 4WD Short Course out there. Team Durango drivers put a lock-out on the podium, taking a fantastic 1-2-3 for the DESC410R amid some fierce competition.

Check out a video of Ryan Lutz in qualifying: http://youtu.be/NcU_Mhu3_wM

Billy Fischer won the opening leg, followed by Travis Amezcua in second for a Team Durango 1-2. In A-main number two it was Ryan Lutz who snook past everyone and put in some consistent running to take the leg ahead of Amecua again 2nd and Billy Fischer coming home 3rd. The battle was on between these three TD drivers and any one of them could take the win with a good result in the final leg. Billy Fischer got out to an early lead but Ryan Lutz wasn’t giving up so soon and put in the fastest laps of anyone during the weekend on his way to catching up with Billy and battle for the win. Billy held on for the win in leg 3 which let Ryan and Travis on equal points- though Ryans leg-2 win would see him podium in front of Travis.

Option parts used by the team:

4WD buggy contained a truck load of talented drivers and the TD boys would have their work cut out for them to win here. Ryan Lutz and Billy Fischer made the A-main in 4th and 5th respectively – and given the guys lack of electric running lately, this being Ryans second time running 4WD electric buggy! – things were more than acceptable.

The hilight of the finals was leg 1 as Ryan battled harder than he’s ever done before to catch and pass former multiple world champion Ryan Cavalieri for a dramatic win. Ryan finished second overall in 4WD buggy and is looking forward to racing more of the class now he’s found his feet!

Option parts used by the team: