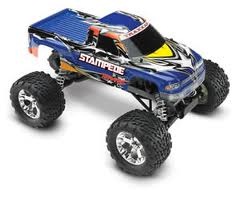 From day to day I often run into fellow colleges and friends. We talk about the weather and about work. But, after a few minutes the conversation usually turns to my hobby. I have talked to several people in the past few months about getting into it. One of the most common questions I get asked is “What is a good RC car to buy?” We talk about the differences between a ready-to-run (RTR) and kits. Cost is always next on the list of questions, and I tell everyone the same thing. “It’s all relative and the money you spend will determine what kind of vehicle you buy and how the quality is.” I assure them that no matter what the budget is, there is a RC car or truck out there for them. Without going into a huge debate about electric or nitro, or if they want to have RTR maybe even build it themselves. I always have suggested electric for first timers. Nitro, while it has become more user friendly, you can’t top the “plug in and charge” aspect of electric.

This brings me to the highlight of the topic. What is the hottest RTR’s and Kits out there for Canada?

Based on my own research I have done with local and distance hobby stores along with communication with the most popular online Canadian suppliers, I have determined with some reasonable accuracy what you see below. Keep in mind this is not a formal study and these things can change daily. I present this info strictly for the fun of be able to compare different markets.

This everlasting classic has held its own over the course of the 1/10-scale era. With brushless motors being a popular upgrade, the waterproof edition Stampede with the stock 550 12-turn motor is a great start for guys up here is Canada who like the 1/10-scale trucks, but enjoy that extra little ground clearance and more “monster truck like” appearance. It is also clearly one of the best bang for your buck trucks.

It has a huge amount of aftermarket support and is the longest lasting 1/10-scale stadium truck in Traxxas’history. The Traxxas Rustler has had just over five different types of Rustler models since its debut. This product also wins up here in Canada for its waterproof ability. Because let’s face it, we still like to drive in the winter. We need something strong and fun to drive year round! We also like the price!

This one comes in the bottom of the top three only because it’s so new. Well, at least compared to the top two contenders. Close on its heels of the Rustler and Stampede the Slash 4×4 is yet another progression from the original 2WD edition released months before. While the 2WD was popular, recent sales across Canada has shown the 4X4 to be the fastest selling model of the Slash series. With such a quick rise in sales, it’s seems to me that everyone who had a 2WD Slashbought a 4WD version. For those who hadn’t bought a short course truck yet, they waited just long enough and got a very well handling vehicle. What Canadian RC enthusiast doesn’t like a 4×4?  We might have varying flat prairie land, but it’s muddy is spots and we like to jump too!

This doesn’t surprise me at all. Like myself and so many fellow Canadian RC enthusiast. We like to go “off-roading” and “tinker.” We also respect a good rock crawler. Add scale realism to the mix and you have any RC kit builder hooked. If you have been in the hobby for a while, or just joined in and want a fun, scale kit to build, Axial has it figured out. According to sales across Canada, it wins for the most recent highest grossing sales for a kit. It also takes top place for after market upgrades. It’s amazing the amount of  hop-ups and different ways to customize these series of trucks. So much for everyone else thinking Canada’s been under a rock–we’ve been climbing them like everyone else!

This was a hard one to determine. Spots #2 and #3 were mixed. When it was determined the second most poplar kits sold across Canada was a close tie with Team Associated products and Tamiya products. Team Associated topped the list for #2 with the TC6. This was contributed by the sales leading up to summer 2011. It does kind of help it got a head start in the calendar year because of the indoor carpet tracks in use during the winter months. But even with some carpet tracks being seasonal, some run year round. With support like that, it’s the numbers that lead me to the Associated TC6.

When you’re look to build a kit, many experienced folks will first think of Tamiya. They have been into kits for a long time. So when Tamiya wanted tooffer something for the on-road rally car crowd, the DF03 was the top choice for Canadians. This came in second for most popular kit recently sold. On-road rally cars are on the rise, may not be the most popular is some areas, but in some Canadian provinces it seems to be an official race class with some clubs. Thanks to the DF03’s robust and easy building chassis, it’s different type of body shells available in the kit, it makes having a variety of choices easy. We Canadians run rain or shine, snow or dirt.