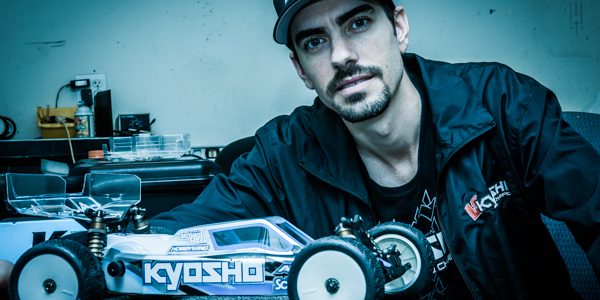 OCRC Raceway is a hotbed for racing and the Expert Stock Class is no joke with some of the fastest American racers in the class calling it their home. It’s taken very seriously and is no beginner class. Needless to say, having a buggy that provides every sort of advantage is a must, and includes all the set-up knowledge and tricks to gain an edge. One racer who has been seeing great success including a recent jaw-dropping winning streak of four straight wins on club racing nights, is Kyosho’s Jason Dias. Known for his custom parts and tuning tricks, his buggy often pushes technology, geometry and ideas he then passes along to other Kyosho drivers including some of their top-level aces. With the release of the new Kyosho RB6.6, surprisingly his buggy is much closer to kit form than what we normally see from him, and as he stated doesn’t need it, but that doesn’t mean he’s willing to relax. Let’s take a closer look. 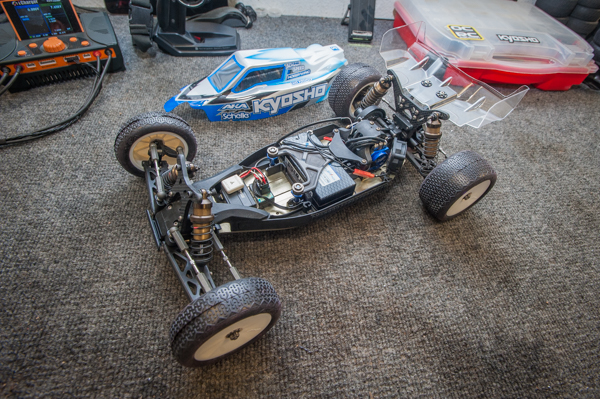 The RB6.6 is Kyosho’s newest 2WD buggy and provides users with all sorts of transmission layout options. Jason runs his with the 3-gear laydown transmission. 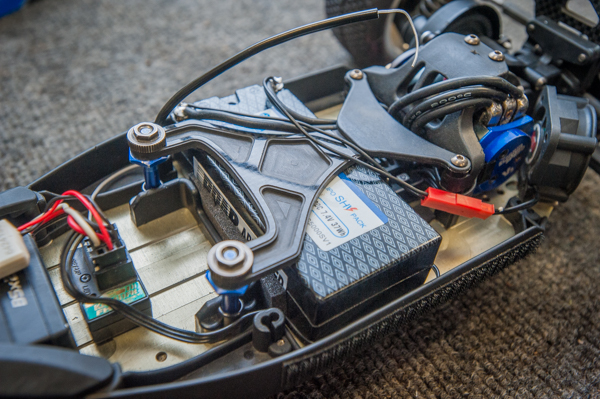 The buggy is powered by an Intellect Power SHV (Super High Voltage series) shorty LiPo battery and held in place by a one-off, custom made carbon fiber battery strap with some modifications for the thumb screws. 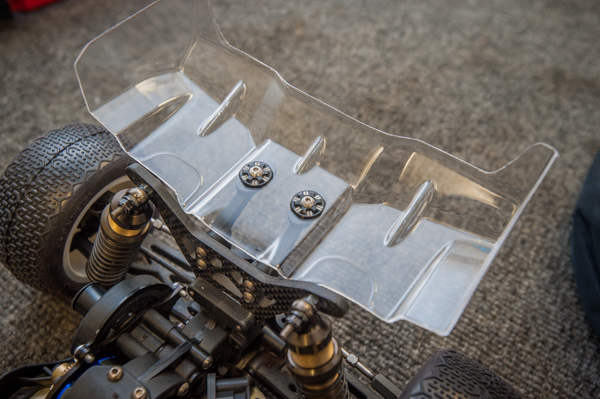 Jason drilled out the plastic wing mounts so he can use milled aluminum wing buttons and titanium screws from Schelle Racing Innovations. He feels this helps to clean up the wing area and allows more precise tuning of the wing. 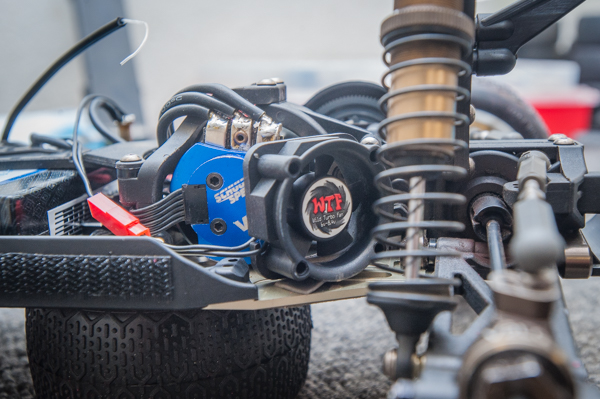 The buggy is outfitted with a SchuurSpeed “short stack” 17.5T racing motor with a WTF fan. Since today’s buggy bodies don’t have much airflow, Jason feels a powerful fan is important to maintain optimum operating temps and to make it more efficient. He solders it in directly to the battery. 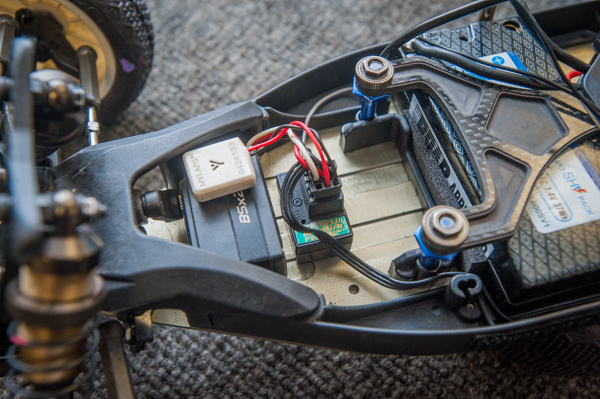 KO Propo BSX2 shorty, “response version” servo with shortened wires provides the speed and torque necessary for racing and frees up some space on the chassis. This is paired up with Schelle Racing Innovations’ aluminum steering rack for precise response.

To operate his buggy, a KO Propo EX-II transmitter is used and secured with a neck strap. 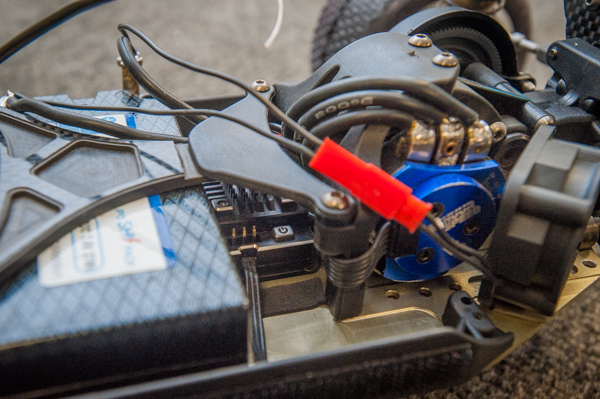 Jason is running the new-to-be-released, unnamed HobbyWing brushless speed control that is a smaller version of the current XR10 Pro, with smaller footprint and lighter weight, strategically placed behind the battery. This position helps shorten the wires, lowering the overall weight of the buggy. He was quick to point out that wires are often overlooked as a source of unnecessary weight while the speed control unit stays in a more rearward weight bias allowing him to move the battery further forward. 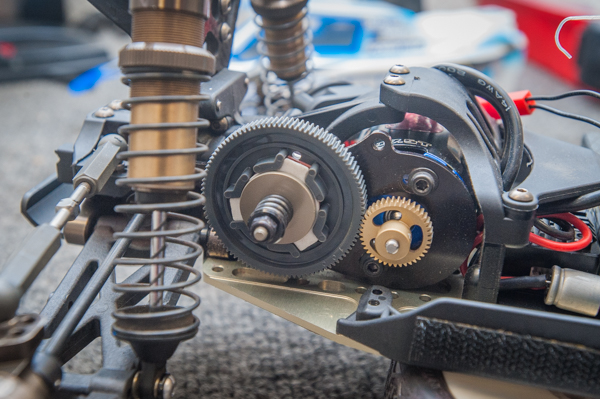 Surprisingly, unlike many top-level stock racers, Jason opts to use a slipper, in this case an aftermarket Schelle Racing Innovations Nova unit. He noted that he felt the buggy had too much wheel spin. He does however, use a lockout unit when the traction gets really high. You may also notice Jason prefers to run 64-pitch gears giving him finer tuning of the gear ratio. 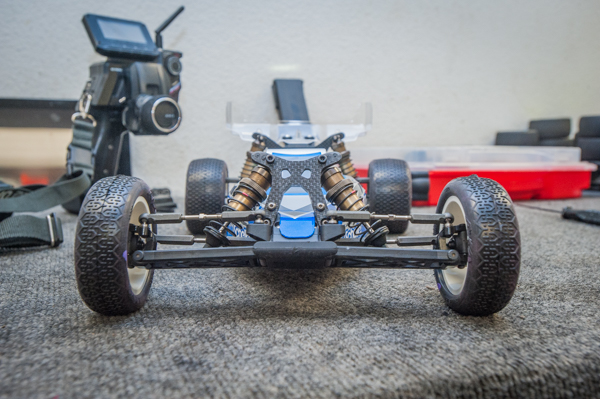 The buggy’s dampers use flat 1.6mm x 2 hole all around with 32w oil in the front and 30w for the rear with Kyosho springs.

Although the body aerodynamic lines are aggressive, no racing buggy is complete without proper livery, and Jason’s blue theme is distinct and adorned with custom made decals along with matching white AKA dish wheels. Tires are Typos in clay compound, but if he needs a little more grip and stability, he’ll switch to AKA Crosslinks.