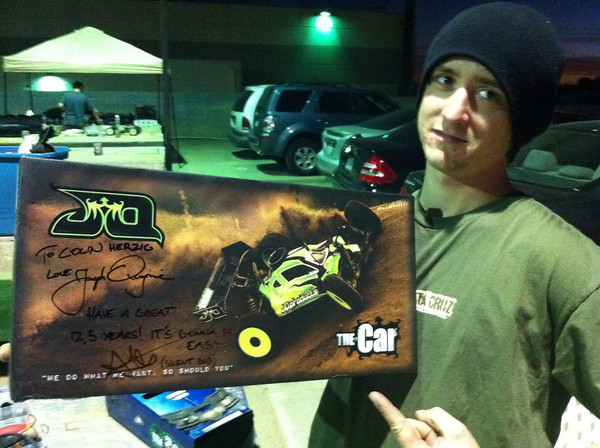 The multilingual US racer Colin Herzig signs a monumental 12,5 (twelve and a half) year contract with JQ Products. Colin will be racing for the JQ Products factory supported A Main Hobbies Satellite Team. Colin is also studying Rapid Prototyping, and his father owns a machine shop, which played a key role in this 12,5 year signing.

“Recently I made the switch from Kyosho America, to run for JQ-Products-AMain Hobbies. I am really excited to start a new adventure with this team, as well as helping out with development in making THECar better than it already is. THECar has tons of potential, and a lot of well thought out ideas on it, that are really going to benefit us in the future. I will be racing for the following companies in 2011 JQProducts, Amainhobbies, AKA Racing, Ko ProPo, Byrons Fuel, T-Wraps, TKO Bearings, Lucky 7, Ascendancy Clutches, Vibra-Tite, and Production Lapping INC.

I would also like to take this opportunity to thank Kyosho America, Joe Pillars, and especially the King Family for all there support in 2010!! I will be attending the following races, Nitro Challenge, Nationals Warm-Up race, Silver State, Neo-Buggy Race, Nationals at Thunder Alley, R/C X-Fest in Minnesota, Most of the JBRL races, and as many other races I can do. Feel free to come up and ask any questions, or concerns you may have with anything.

It’s not going to be easy.”