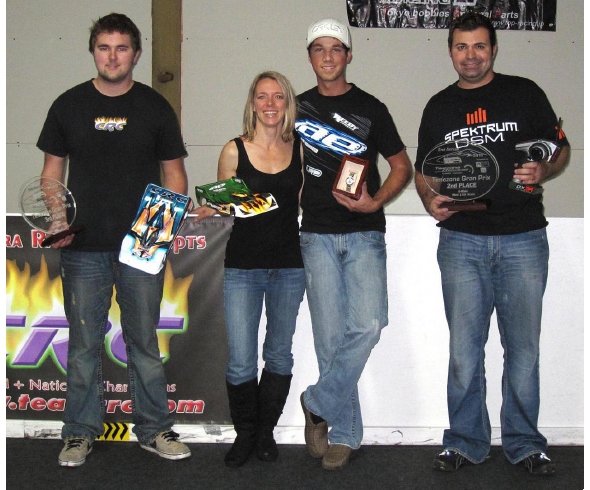 The 2nd Annual Timezone Grand Prix was held October 10-12 at the beautiful Timezone raceway in La Center, WA. With Scotty Ernest and the hard-working Timezone crew putting on the show, the race was bound to be first class.

Early on in practice, I felt that both my TC6 and 12R5.1 were on pace with the local fast guys and well-known drivers Donny Lia and Paul Lemieux. With practice scheduled all day Friday, great importance was placed on the three rounds of qualifying scheduled for Saturday.

Saturday started perfectly for me as I set the TQ run in the first round of Open TC by .2 seconds over Paul Lemieux. Unfortunately my time would later be beaten by Lemieux in the third round by only .2 seconds again. The battle between Paul and me was very close! Local Northwest driver Kody Knutson qualified third for Sunday’s main event.

The first round of 1/12 Modified did not go well but I was able to recover in the second round with the only 50-lap run in qualifying. This run would eventually hold up for TQ. In the third round the track became faster but a few crashes by both me and Donny Lia would prevent any improvement, which meant I would start from the pole position.

Sunday was going to be difficult, with triple A Mains for both classes. The first 1/12 Modified A Main went very well for me; I started on pole and lead the entire race with Donny Lia charging hard. A few crashes early on prevented him from challenging so I kept my calm and led from wire to wire. The second 1/12 Modified main was a different story. I made a tire change for this leg which did not improve my car. A good start by Donny and a bobble from me allowed him to take the lead! He maintained the lead until the last lap when he made a mistake which allowed me to cross the line first for the A2 victory and the 1/12 Modified title.

In the first Open TC main, Paul and I got away to a clean start and we stayed within 5-10 feet apart until the 4-minute mark when I made a few mistakes. I dropped about 1.5 seconds behind him and maintained this until the finish while setting the fastest lap of the race. Another clean start in A2 allowed Paul and I to get away clean. Paul was able to extend his lead to a half straightaway and it remained this way until the lead. Paul won A2 and the title while I went on to win A3 by a large margin and take second overall.