Tamiya’s well known worldwide for producing some of the highest quality and detailed models so it’s no surprise to see them taking what they learned in the model scene and applying it to RC cars. The Tamiya Tractor Truck series has many big rigs that are some of the most well detailed vehicles in their lineup and that has been happening since the early 90s with the introduction of the King Hauler. 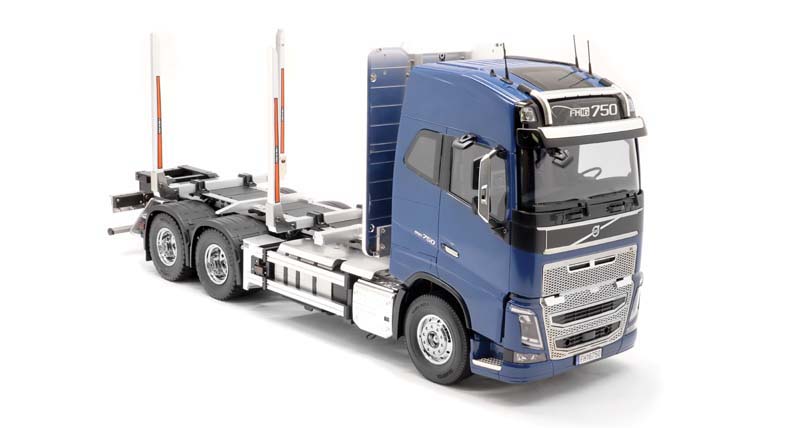 Over the years the complexity of the Tractor Trucks has grown and with that comes more of the detail that we all love. The Volvo FH16 Globetrotter 750 6×4 Timber Truck is a great example of that. The cab alone is made up of over 80 pieces and once complete, the Volvo looks like a big rig that you would see rolling down the highway.

Tamiya nailed the look then they threw in some cool features underneath like a ladder frame chassis, 3-speed shift-on-the-fly transmission, leaf spring suspension and a lot more. Part of the fun here is building and detailing this awesome rig and that takes a very long time but the result of that labor is well worth it. 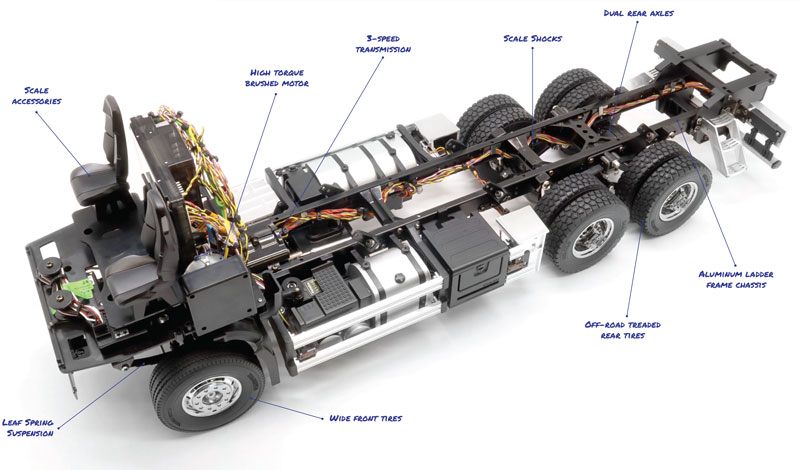 For years Tamiya has had the best manuals in the business and the Volvo is no exception. This manual however is one of the thickest Tamiya manuals that I ever laid my hands on. All the screw lengths are clearly marked and the assembly process is well thought out for the most part. There’s a lot going on in the manual but it’s easy to follow.

Tamiya kits are known for providing a stock brushed motor and speed control to help get you up and running. The Volvo doesn’t include a speed control but you do get a motor and this one is special; it’s a high torque 35-turn brushed unit called the TR Mighty Tuned motor and it will have an easier time pushing around this heavy (even when empty) rig than the standard motor that you usually get with a Tamiya rig.

You have to provide the servo for the steering and shifting duties and I recommend a steering servo with at least 125oz. In. of torque. When it comes to picking a radio, you can get a 2-channel unit and lock the transmission into whatever gear you want, you can pick up a 3-channel unit and shift the transmission on the fly or go all out and get a 4-channel radio that can be used to operate Tamiya’s ultra cool Multi-Function unit.

As expected, all of the parts that make up the Volvo go together perfectly but there are a few things to pay close attention to during the build. The red lenses in step 31 are directional so if they don’t fit into the other larger lens, flip it over and try again instead of forcing it to fit. The top and bottom are tapered and match the lens they go into. The tanks in steps 35 and 36 are painted silver then black is added to enhance the parts. After spraying the silver on Q8, Q5, R7 and R6 assemble the top and bottom halves before masking and painting the black that way to ensure that the top and bottom are perfectly aligned.

If you install the Tamiya Multi-Function Control Unit, assemble the lower front cab after the main cab and mount them at the same time. The lights for the lower portion will have to be connected to the control unit before the main cab is installed and secured. You’ll also have to pick up LEDs with longer wires to reach from the rear light assembly to the front of the chassis. The last thing you need to know about this particular build is that you may want to invest in a good set of micro screwdrivers. The Volvo has some of the smallest screws out there and having the right tool for the job will make your life much easier. 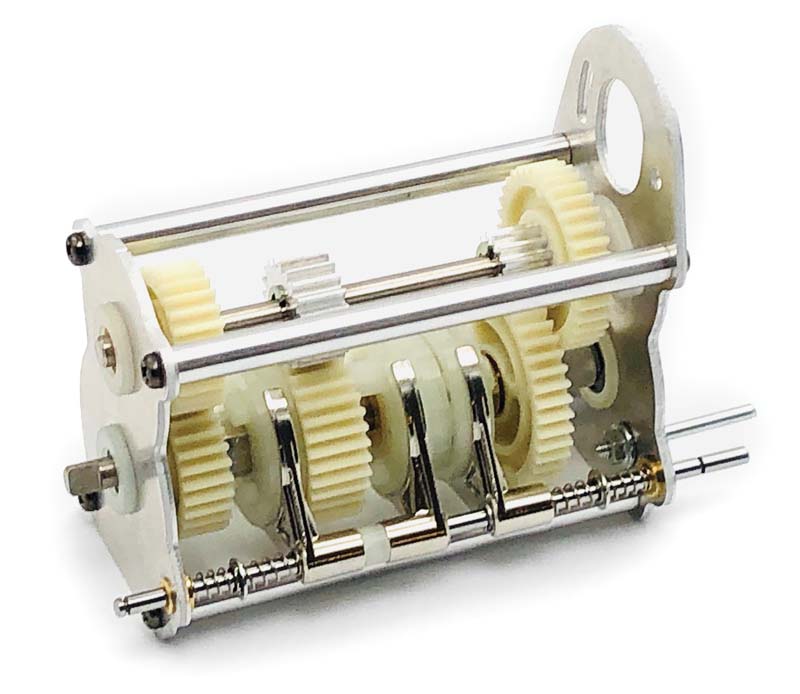 Inside the transmission housing are a lot of gears that are used to allow you to change ratios on the fly through your radio. You can also fix it into the gear of your choice if you’d rather use the channel for something else.

Before I even finished building the Volvo, I was excited to load it up with logs and get it on the road. Then I saw later in the manual that Tamiya doesn’t recommend that you run the truck with the logs in place. Once I completed the build and loaded up my logs, I totally understood why they would
say that.

The truck alone is heavier than any Tamiya big rig that I have built and believe it or not the small amount of wood that you can load onto the back of the truck weighs a lot more than you would think. I shot my beauty shots with the logs in place then removed them for my runs. It’s a bit of a bummer to have to do that but it’s better than burned up electronics.

The Volvo has a lot of torque in first gear and gets up to speed in a hurry, second gear feels perfect in all areas and I feel that third gear didn’t get the truck out of the hole as well and it’s top speed made me nervous. The last thing I want to do is tip this truck on it’s side or run it into something and ruin all the work that was put into it. Shifting gears while driving the truck is smooth and you can see a noticeable difference in speed when you leave the throttle at a constant speed during shifts. In the end I ended up leaving the shifting stick in the middle position and riding around in second gear.

For my build I went with a standard servo for steering and I found out pretty quick that it was a mistake. When building tractor trucks in the past, standard servos had plenty of torque for the driving that I was doing and the truck that I had built but this truck is considerably heavier and the front tires are much wider and that combo made my steering servo work harder to guide the truck along. 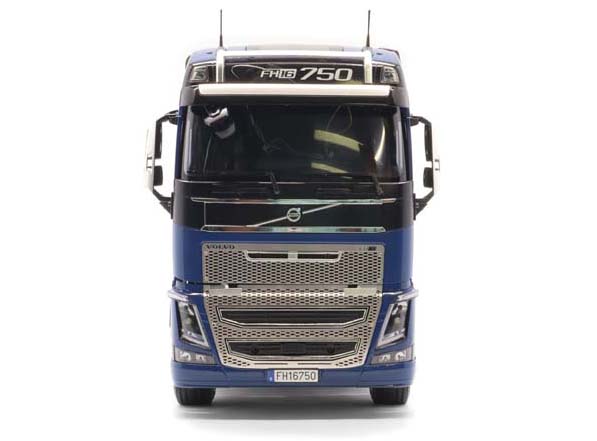 Bring it to life with tamiya’s Multi-Function Control Unit

Tamiya did a fantastic job of making the Volvo look like the real deal and thanks to their Multi-Function Control Unit, you can make it sound and lights like the real thing and add more scale realism. You can buy the standard unit that has a sound that matches the big rigs you find on U.S. highways or you can get the one that has a European sound for trucks like the Volvo. The control unit itself has a speed control built into it that’s perfect for Tamiya’s brushed motors.

Included with the unit are all the parts and hardware that you need to install into your big rig no matter what version you build. Also included are several LEDs that are installed into various locations on the body and that get plugged into various locations on the control unit. Tamiya does a great job of color coding the wires and giving you labels to mark all the plugs.

Some of the plugs on the control unit are also marked and the manual has a clear drawing to guide you during the install. Some of the sounds you’ll hear out of the included speaker are the engine sound, air horn, air brakes, reverse beeper and more.

When making tight turns, I took things a little slower than the truck could handle to avoid tipping. Lucky the area that I was doing my testing in was wide open and I was able to make very wide turns most of the time. 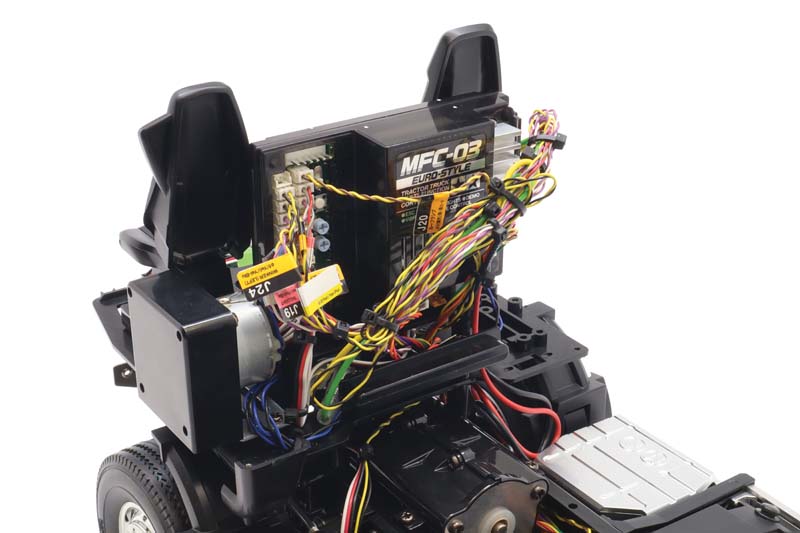 The Tractor Truck Multi-Function Control Unit is designed to fit into all of Tamiya’s Tractor Trucks. The hardest part of the install is finding a way to control and hide all the wires that get plugged into it. 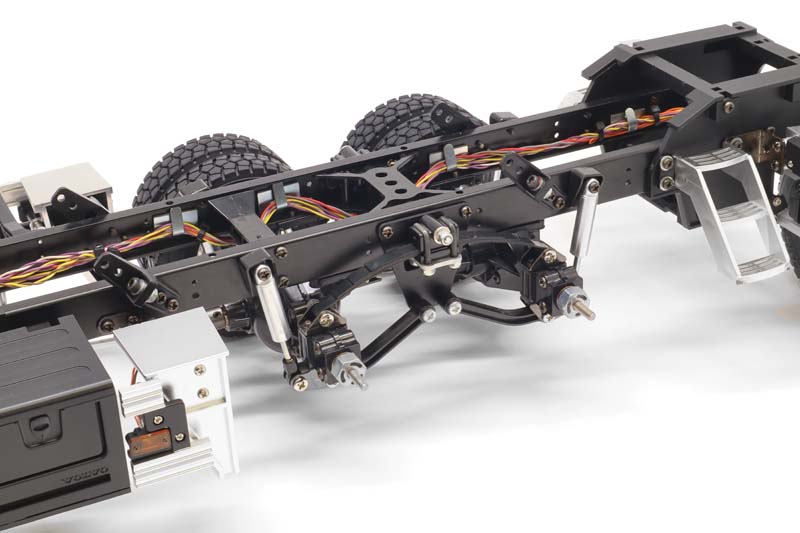 Realistic leaf spring suspension holds up the chassis and spring loaded friction dampers help with the heavy load that this truck sees.

The tires used on the Volvo are very different from what we’re used to seeing. The front tires are wider to look like what you would see on a real truck and they help support the heavy weight of the truck. In the rear you’ll find an off-road style tread.

The Tamiya Volvo FH16 Globetrotter 750 6×4 Timber Truck is hands down one of the most detailed tractor trucks out there and when the build is finished, you have something that will look great on the road and just as good as a display in your home. You don’t have to be an expert to get this truck from a pile of parts to a roller.
Tamiya makes the job easy thanks to a well done manual and easy to assemble parts. The truck works as advertised; the transmission shifts well, the steering works with no issues, the suspension handles the weight well and so on. Now that my review is done I plan on driving my truck but not often. I want to keep it looking pretty and enjoy looking at the result of all my work.

Text and Images by Kevin Hetmanski